Beulah Park was a park near where the Central Reservoir is now. It hosted church camp meetings and 'revivals'. It was one of the destinations noted on the cars of the Highland Park & Fruit Vale Railroad.

The first reference found in the Oakland Tribune was in 1883. 4

In 1895, the Beulah Park Camp Meeting Association filed to be able to sell some of the land. 2 Meetings were still held there until at least 1922. 3 A newspaper photo in 1926 is labeled "Former Beulah Park—Now Modern Homes." 5

The Beulah Park name still appears on maps to at least 1918, but much of it was subdivided by then. A short street named Beulah Place existed until the MacArthur freeway was built. 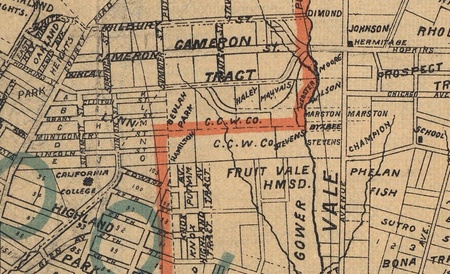