“It looks like it’s about ready to lift off.”
—Victor Newlove, of Armet Davis Newlove Architects, in a 2011 interview with NPR

Biff’s Coffee Shop (1963–c.1995), at 315 27th Street, was a “Googie”-style coffee shop designed by the Los Angeles architectural firm of Armet & Davis (dubbed “the Frank Lloyd Wrights of diner designers” by SF columnist Herb Caen). It was built in 1963 by Standard Oil (now Chevron) in combination with an adjacent gas station, on a triangular lot at the corner of 27th Street and Broadway. The restaurant was the firm’s only round restaurant, and its now-empty building is a rare surviving example of Googie architecture in the Bay Area. 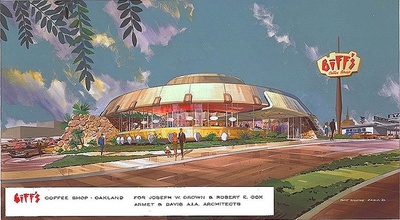 According to the original permit, the unique circular building footprint measured 38′ 6″ in diameter — an area of 6000 square feet — and could seat 125 patrons. It was constructed for $750,000 of reinforced concrete block and stucco, with a mansard composition roof surrounding the rooftop mechanical equipment.

The original interiors featured Naugahyde booths, terrazzo floors, and geometric wood paneling with an open, central “exhibition” kitchen. Some of the corner booths had “princess” telephones patrons could use to make outgoing calls. Operated by a Los Angeles chain, Biff’s catered to families. In later years, the restaurant was operated as JJ’s Diner.

In 1996, Chevron developed plans to demolish the building and replace it with a McDonald’s restaurant and gas station combo, called a ‘McChevron’. However in 1997, in response to public protests (over 7,000 people signed petitions to spare the restaurant from demolition), Oakland’s Landmarks Preservation Advisory Board designated the site as an historic resource (thereby requiring an Environmental Impact Report prior to any planned demolition).

In 1998, Chevron withdrew its plans for the McChevron and in 1999 sold the property to Ken Betts. The current owner is Steve Simi, who operates a used car sales business on the Broadway side of the building.

The basic original structure is intact, although the original Naugahyde seating is gone and would need to be replaced. The shingles and sheet-metal awning cover the original mica-plaster roof and “ski-sled” entry element (which is still intact and hidden under the metal awning work.) The kitchen equipment installed by the original operator is also gone and needs replacement, per the original plans. 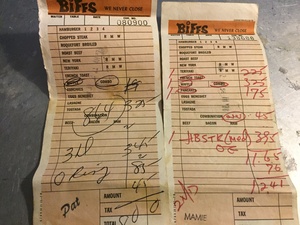 order checks, courtesy Daniel GlaserSomeone earlier edited this page to note that "the building is not up to modern seismic code, which means it would require very expensive renovations in order to re-open to the public", though in a one-story building with a similarly open plan, it's questionable whether such retrofitting would cost any more than the ordinary renovations that would need to be done to any building that has sat dormant as long as this one has.

Someone also wrote, "The site is also located too far from Oakland’s Uptown District to benefit from synergy with Uptown's dramatic revitalization and trendy new restaurants." Oakland right now being one of only a few thriving spots in this country, what they call “Uptown”, if you haven't noticed, is creeping further up Broadway. Developers are working frantically, and unless checked will keep building until everything from Jack London Square to Rockridge is contiguous and looking like Manhattan. Welcome to the jungle …

Another person asked, "Just wondering ... drove by today ... does anyone know the current status of the building?  Is it set for any type of renovation?"

Buried in today's (2015-10-16) Oakland Tribune: apparently on Oct. 12 a demolition permit was approved – a developer wants to build yet another 7-story “hipster hive” on the spot! It may not be too late to stop this though … some activists would like to get the word out. Others agree with the caption below -- enough already! Biff's is dead and gone, and Joyce Roy's proposal to bring it back with the rejuvenated Du-pars is not realistic. Let it go, people! 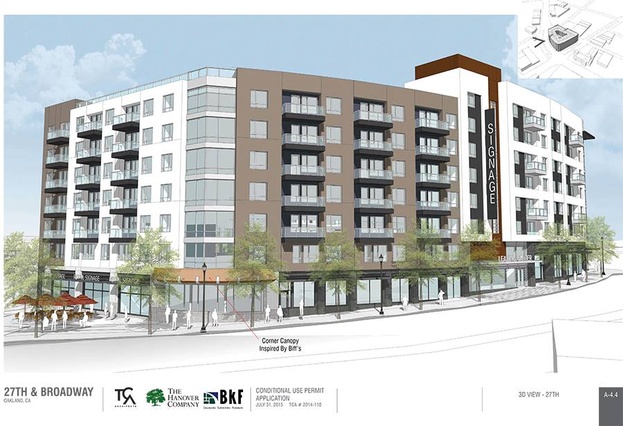 This is what's planned for the site. Enough already …