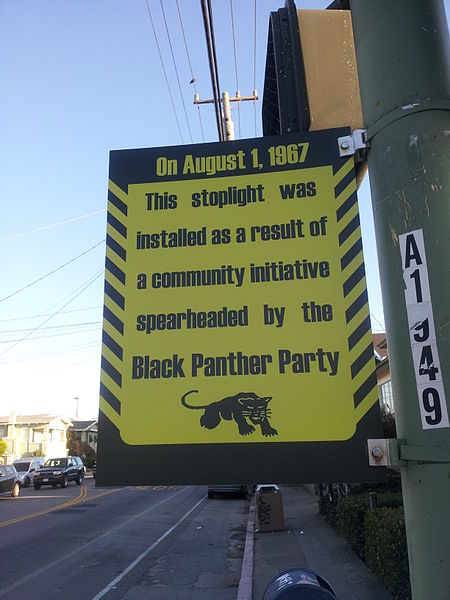 An landmark on 55th and Market St. in North Oakland states that "This stoplight was installed as a result of a community initiative spearheaded by the Black Panther Party".The English Wikipedia Entry,  the Black Panther Party "was an African-American revolutionary socialist organization active in the United States from 1966 until 1982" which "began in part in the Longfellow neighborhood." (Longfellow Wikipedia Entry).

Bobby Seale and Huey P. Newton both attended Merritt Junior College in Oakland in the early 1960s. As students, they participated in the Afro-American Association (est. 1961), and the Merritt Black Student Union. 1  "In the summer of 1966 Newton and Seale worked at a Bay Area CAP [Community Action Program], the North Oakland Neighborhood Anti-Poverty Center." "The center's office was the Party's first headquarters." [Nelson, 55]

Two OPD officers opened fire on party headquarters at 4421 Martin Luther King, Jr. Way (then Grove Street). No one was injured, but Mayor Reading quickly condemned the act and the officers were arrested, fired and charged. 3

In 1968, "serve the people" programs were initiated for all chapters. These included "attention to medical issues" 1

What We Want Now!

It is really hard to find good and/or authoritative and/or non-biased books about the Black Panthers. By the nature of the subject, it's difficult to find "objective" texts: many of the Party members are dead from state violence, and the Party ended fragmented. Thus those remaining alive are left with privileged voices. Below are some texts that wiki editors have read.

See the Black Panther Party, Oakland, California, 1968-1972 in the Bob Fitch Photography Archive at Stanford for dozens of photos. 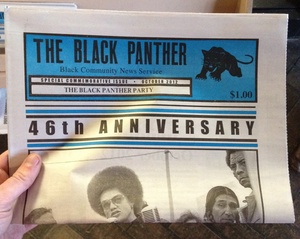 A copy of The Black Panther found at the West Oakland Branch library.