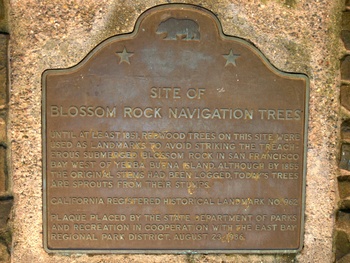 The Blossom Rock Navigation Trees were redwood trees used as navigational tools to help sailing ships entering the Bay avoid “Blossom Rock”, a major hazard to the west of Yerba Buena Island that was submerged about 5 feet underwater. The original trees were logged c. 1851; the current trees are new trees growing out of the stumps.

British sea captain, F.W. Beechey, after a tour of the Pacific Ocean from 1827–8, wrote about “Blossom Rock” and the trees used for ships to steer clear of encountering the rock:

“After passing the fort, a ship may work up for anchorage without apprehension …The only hidden danger is a rock with one fathom on it at low water … between Alcatraz and Yerba Buena Islands. It has seven fathoms alongside it; the lead therefore gives no warning. The marks when on it are, the north end of Yerba Buena Island in one with two trees (nearly the last of the straggling ones) south of Palos Colorados, a wood of pines situated on the top of the hill, over San Antonio, too conspicuous to be overlooked …”2