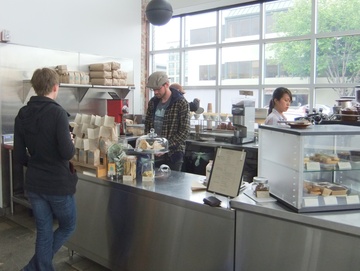 Blue Bottle Coffee
photo CC SA-BY-NC from Our OaklandBlue Bottle Coffee is a studiously hip purveyor of coffee near Jack London Square. They are followers of the so-called "third wave" movement of coffee roasters. Unlike most third wave roasters, however, their coffee actually tastes good.

It can get busy at times, but don't worry, you can check your iPhone or compare tattoos with others while you wait in line. Or you can read and snicker at the liner notes on the coffee beans they sell.

To wit: "Every year, our producer partner Aida Batlle pulls together a selection of some of the most delicious peaberry coffees from her farms in El Salvador. Once her Grand Reserve is available, it tends to stir up the sort of frenzied obsession among coffee people that Pliny the Younger stirs up among beerophiles – or that a well-salted salami stirs up among puppies. This year, the coffee surges with violet, plum, citrus and cocoa."

Or: "The Capucas, a washed Caturra from Celaque mountains in Honduras, has the delicate acidity, subtle spice and viscous sweetness of a mix of Tamarind Jarritos and good old Coca-Cola. Vanilla, cinnamon, and a touch of lime zest are all present in this coffee, but in small enough quantities to be pleasant rather than distracting. As a drip it is as reliable and conservative as William Buckley; as a shot it is as colorful, charming, and surprising as Gore Vidal."

Although Oaklanders typically will not tolerate lines for food-type-things (unlike our neighbors to the West or North, and the daily lines at Bakesale Betty's notwithstanding), you can regularly observe a line in action at the Jack London Square Blue Bottle location - even though it is fairly out of the way of heavily foot-trafficed places like downtown, Grand Lake, Chinatown, or Fruitvale. How do these people get there? Do they drive and then stand in line? Why do they stand in line? What is it about Blue Bottle coffee locations that causes lines to spontaneously form?

Blue Bottle Coffee also has a kiosk at the Temescal Farmers' Market on Sundays.

According to this article, Blue Bottle just raised (January 29, 2014) $25.75 million and "Blue Bottle said it had signed more leases in Oakland, Manhattan, Brooklyn, Palo Alto and Los Angeles that will open over the next twelve months."

In 2015, Blue Bottle was the recipient of the East Bay Innovation Award in the food category. 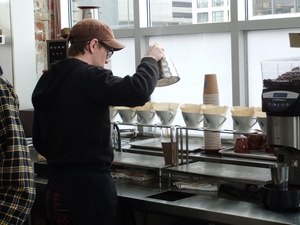 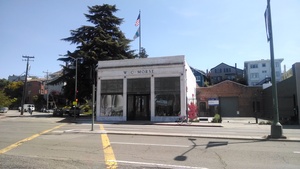 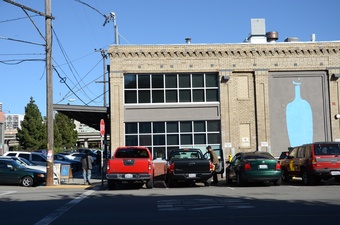