Bobby Hutton was born in Arkansas, and his family moved to Oakland when he was 3 years old, after they were visited by nightriders threatening blacks in the area. At 16, he was first member to join the Black Panthers and served as the first treasurer.

On the night of April 6, 1968, Bobby was killed by Oakland Police officers after Eldridge Cleaver led him and twelve other Panthers in an ambush of the Oakland Police, during which two officers were seriously wounded by multiple gunshot wounds. The impetus for the police ambush was the assassination of Martin Luther King, Jr. on April 4. The ambush, which Cleaver admitted he led, turned into a shoot out between the Panthers and the Oakland police at a house in West Oakland. About 90 minutes later Hutton and Cleaver surrendered after the police tear gassed the building.

Eldridge Cleaver said Bobby stripped to his underwear to show he was unarmed, but police shot him more than dozen times. Police maintained that Hutton attempted to run away and ignored orders to stop, but one Oakland police officer who witnessed the shootout later told Cleaver that, "What they did was first degree murder." Bobby Hutton was buried in Mountain View Cemetery, but didn't get a gravestone until 2003, 35 years after his death. 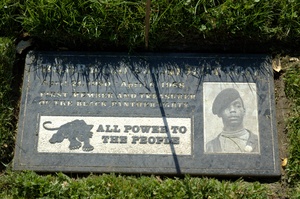