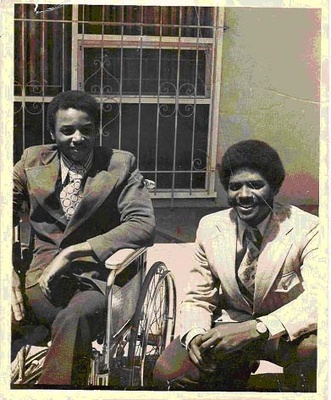 Brad Lomax and his brother Glenn. Photo provided by Leroy Moore. Fair use.

Bradford (Brad) Clyde Lomax (September 13, 1950 – August 24, 1984) was a disability rights advocate and a member of the Black Panther Party. He was a founder of the East Oakland Center for Independent Living sponsored by the Black Panthers, and a noted member of the "504 sit-ins" in 1977 to pressure the U.S. Government to implement Section 504 of the Rehabilitation Act of 1973.

Lomax was born September 13, 1950 in Philadelphia, to Katie Lee Bell (Lomax) and Joseph Randall Lomax. After graduating high school in 1968, Lomax attended Howard University. He began falling as he walked, and learned that he had multiple sclerosis. As the disease progressed, he began using a wheelchair. 2

After moving to Oakland, he learned about the Center for Independent Living (CIL) in Berkeley. In 1975, he approached the director of the CIL, Ed Roberts, and proposed founding the East Oakland CIL, supported by the Black Panthers.

After the federal government dragged its feet on implementing Section 504 of the Rehabilitation Act, protests began at various federal buildings around the country on April 5, 1977. In San Francisco, they occupied the 4th floor of the building. While many of the other protests ended in a few days, in San Francisco they stayed for 26 days. As the occupation continued, various groups provided support, and the Black Panthers provided daily hot meals. 3

The leaders decided to draw further national attention to the problem by traveling to Washington—not an easy thing as most transportation was not accessible. They protested outside federal buildings, held candle-light vigils outside the home of Housing, Education and Welfare Secretary Joseph Califano (who was the one who needed to sign the regulations), and even protested outside President Jimmy Carter's church. 3

Califano signed the regulations on April 28, 1977.