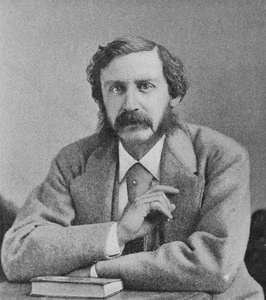 Bret Harte, 1872
public domain, via Wikipedia 1Bret Harte (Francis Brett Harte) (August 25, 1836–May 5, 1902) was an American author and poet, best known for his somewhat romanticized accounts of pioneer life in California. He lived in Oakland from about 1854 to 1857 with his mother, sister Margaret (Maggie), and stepfather, Colonel Andrew F. Williams, who was later Oakland's fourth mayor.

Family tradition has it that Harte worked in Sanford's Drugstore. 4 While he didn't live in Oakland long, apparently he spent much of his time here reading:

"In the mid-1850s, Frank Harte was without prospects and virtually trapped in a provincial town not yet five years on the map. He did then as he had done as a child: he retired into the world of his books. The tiny pergola room—described by a later occupant as 'a skylighted locker'—became his retreat, where he would withdraw to familiarize himself with his growing library." 4

Given his love of books, it's unsurprising that he was friends with fellow poet and librarian Ina Coolbrith. Harte was the first editor of the Overland Monthly in 1868. Contributors to the magazine included Bret Harte, Ina Coolbrith, Jack London, Joaquin Miller, William Saroyan, Mark Twain, and John Muir.

Harte supposedly quipped of Oakland, after it was relatively unscathed by the 1906 earthquake, "there are some things the earth cannot swallow." 2 However, the New York Times got this wrong. Harte had written this in a piece of fiction, "San Francisco In Ruins", some 30 years prior to the 1906 earthquake. 3

Colonel Williams' home was on the northwest corner of 5th St. and Clay. While the home is no longer standing, Harte is remembered in Oakland with the Bret Harte Boardwalk which preserves some historic buildings in the area. Bret Harte Middle School is also named for him.