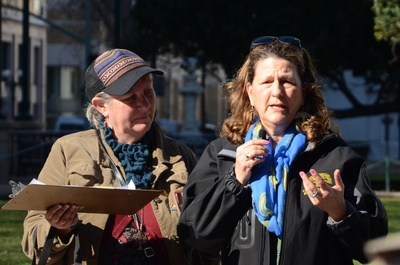 Brooke A. Levin is a long-time city of Oakland employee, who has served under 5 Mayors, 13 City Manager/Administrators, 29 City Councilmembers, and four Public Works Directors over 26 years. She has served as director of the Public Works Agency since 2013.

In 1991, Levin was a policy advisor to mayor Elihu Harris. Following the 1991 Oakland Hills Firestorm, she conceived of and created the Firestorm Mural.

She was appointed as Oakland's first Environmental Services Manager in 1994. She led city efforts to bring all environmental programs under one umbrella, including Creek to Bay Day, the Environmental Expo, Adopt-A-Spot, and other community engagement programs.

In 2004, Levin was appointed assistant director of the Public Works Agency. Among other things, she saw the need for and created the "one-stop" Public Works Call Center. Many people now access functionality this through the See Click Fix website.

She was appointed interim director of the Public Works Agency in 2013, and made director in June, 2014.

Before her retirement in 2017, her 26 years of service were recognized with a 2017 resolution.pdf.