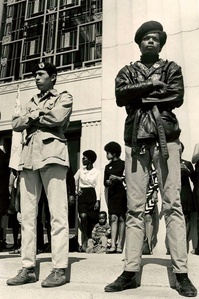 Oakland Brown Berets and Black Panthers at the Alameda County Courthouse in Downtown Oakland in 1968 at a Free Huey Newton Rally. 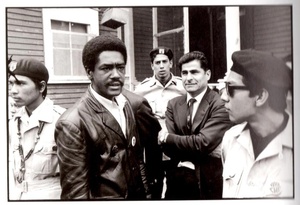 Black and Brown Solidarity. Bobby Seale of the Black Panthers and El Tigre Reies Tijerina and Oakland Brown Berets as Body gaurds. at Defremery Park in West Oakland in 1968.

The Brown Berets were a Chicano nationalist organization that believed in Chicano self -determination and self defense of the community against racism and police brutality. The Brown Berets formed in 1966 as the "Young Chicanos for Community Action" in East Los Angeles by Chicano students like David Sanchez and Carlos Montes. The next year they took on the name "Brown Berets." They dressed in brown khaki uniforms and wore Brown Berets and took on a look similar to the Black Panthers.

In 1967 Chicano students at Merritt College, the same college where Bobby Seale and Huey Newton had formed the Black Panthers, decided to contact the LA Brown Berets about starting a chapter in Oakland. Oakland would be one of the first chapters outside of Los Angeles. Based out of the Fruitvale district, they began forming an Oakland chapter made up of students and community youth. The Brown Berets in Oakland began doing security at protests like the Third World Liberation strike at UC Berkeley and the Oakland Chicano Moratorium at San Antonio Park. They also did security for Chicano leaders like Corky Gonzales, Reies Tijerina, and Cesar Chavez when they would come and give speeches in Oakland. The Brown Berets also taught self defense against police brutality and patrolled the streets like the Panthers and the Chicano Revolutionary Party to make sure Chicanos were not harassed by the Oakland Police.

Black Berets Brown Berets and Black Panthers having a conference on Black and Brown Solidarity. in Oakland at the Oakland Auditorium ( Henry J Kaiser) in 1970. 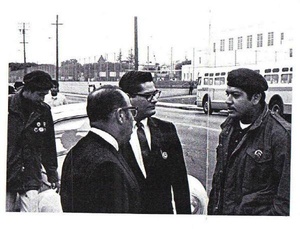 Brown Beret Jorge Gonzales doing security at a Chicano student walk out at Fremont High school in 1970The Brown Berets in Oakland were also in solidarity with the Black Panthers. Both organizations worked together. They held Black and Chicano unity student conferences and the Brown Berets would attend the Free Huey Newton rallies and protest when Huey Newton was facing murder charges for a shoot-out with an Oakland Police officer.

More about the Chicano Movement in Oakland: