CC SA-BY Our Oakland
Bruce Beasley (b.1939) is an Oakland sculptor, specializing in large, abstract expressionist works. He has a studio in West Oakland.

His works are in the permanent collections of museums around the world. Beasley's works displayed in Oakland include "Vitality", a large sculpture at the north end of Frank Ogawa Plaza, and "Tragamon", a large acrylic block in the fish pond at the Oakland Museum of California.

Beasley moved to West Oakland in 1962 as a young artist and recent graduate of UC Berkeley, as West Oakland was the only place he could afford. Since then, Beasley has been active in promoting and improving the area. In the 1960s, he helped found the South Prescott Neighborhood Association, which worked to force the city to install streetlights and change the zoning of the neighborhood heavy industrial to mixed use. 1 [ question: is the South Prescott Neighborhood Association still active? Or did it become part of the POPNA or another group? ]

In October, 2014, Beasley announced he will donate his studios to the Oakland Museum of California. 2, 3 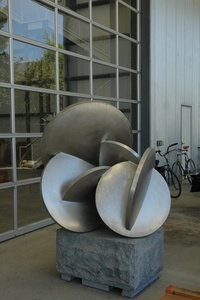 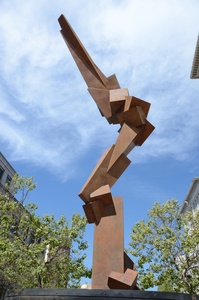