Christian Otto Gerberding ("C.O.G.") Miller (October 1, 1865–April 23, 1952) was a founder of the Pacific Lighting Corporation, and later was on the board of directors of Pacific Gas & Electric Company. He was the son of banker Albert Miller and his wife Mary Ann (Kendall) Miller.

Also in 1886, Miller and his business partner W. B. Cline incorporated the Pacific Lighting Company. At first he held the position of treasurer, then in 1898 he became the company president.

After Einnim died unexpectedly in 1896, C.O.G. had a striking mausoleum built in Mountain View Cemetery. It is one of several pyramids in Mountain View, and sits just below Millionaire's Row. Above the door are Egyptian wings and snakes, and the door has a plaque with Enie's image. C.O.G. is interred there, as are numerous other family members. There is a separate marker for Robert just outside the mausoleum. 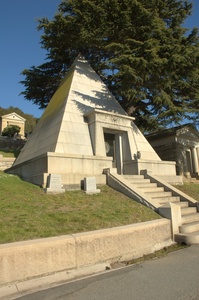 Miller mausoleum
photo from Our Oaklland 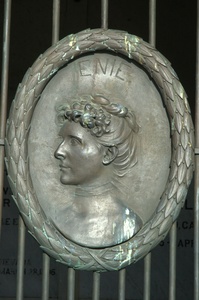 plaque for Enie
photo from Our Oakland