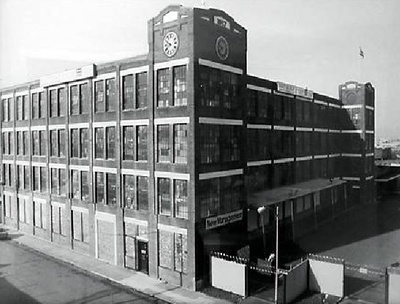 The California Cotton Mills in Oakland was the largest cotton mill west of the Mississippi River when it began in 1883. Designed by civil engineer A.C. Griewank, the buildings were located in the Fruitvale neighborhood at 1091 Calcot Place, on 12 acres, at its peak the Mill employed 1,500 workers, mainly Portuguese Americans who settled in the surrounding area. The Mill produced a wide variety of finished products, such as comforters, drapery cloth, table padding, towels and mops.

In 1917 a new facility replaced the original building, and during both World Wars was a major supplier of tents, parachutes and fabric for the military. 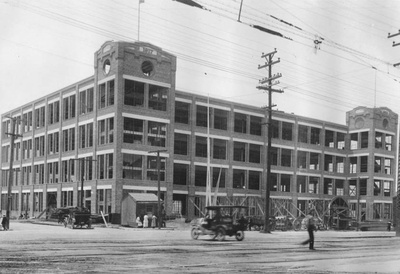 New plant California Cotton Mills, foot of Twenty-third Avenue, Oakland. The cotton mills is one of the oldest and largest industrial plants in Oakland.  With the growth of cotton raising in the Imperial Valley this plant is forced to expand. Now has 1300 employees and will add several hundred more. (1917) 2 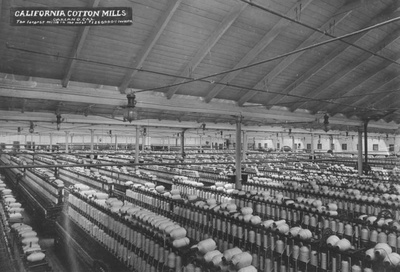 Interior view California Cotton Mills (old plant). The new plant in course of erection will be much larger, better lighted and more convenient than this. (1917) 2

The majority of the Mill was closed on June 30, 1954 and later demolished for the construction of the Nimitz Freeway (I-880).

The main building remains and is now the California Cotton Mills Studios, a community of artisans and small businesses people occupying 74 work/live studios, with a small museum detailing the history of the Cotton Mill in the lobby of the building. 1 Seismic retrofitting was carefully undertaken to protect the integrity of the building.

For those who are taking the overpass between Oakland and Alameda, or driving on the Nimitz Freeway, this building is a distinctive and familiar sight.

On February 20, 1979 the California Cotton Mills (1917 building) was designated Oakland Landmark #24, under Zoning Case #LM 78-653. The building is also listed on the National Register of Historic Places. 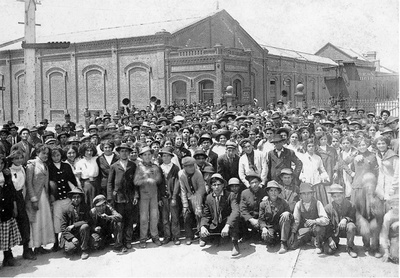 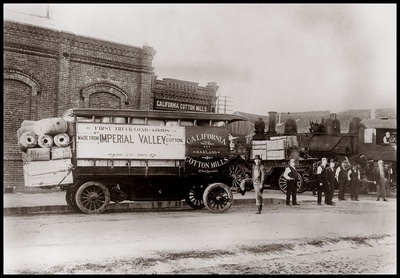 Cotton delivered to the California Cotton Mills (circa 1909) 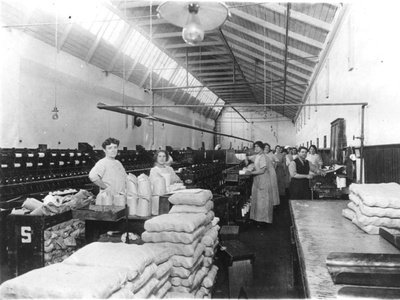