The California Voice (1919 - present?) is weekly newspaper serving the African American community. It was run for many years by Lillian and E. A. Daly, who purchased the newspaper in 1927.

Beginning in 1971, the California Voice was owned by the Reporter Publishing Company, owned by Carlton Benjamin Goodlett. 3 Dr. Norvell Smith was head of the board, and Paul Cobb became managing editor. 6 The paper moved to San Francisco in 1976. Amelia Ashley-Ward purchased the paper in 1997. 5 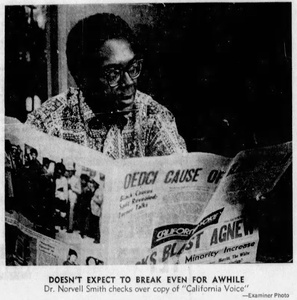 (There was also a prohibition newspaper called the California Voice, started in 1884, later based in Los Angeles, run by Wiley Phillips and later Ethel Hubler.)