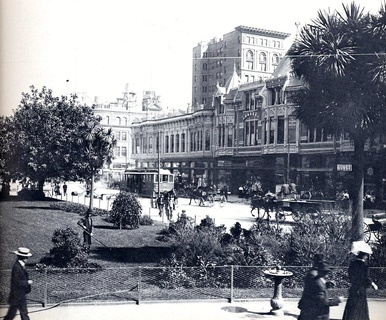 Camron Hall was in the center of the block on the south side of 14th Street between Broadway and Washington.

[Does anyone have more information on this beautiful old building?  Architect?  Date built?  Purpose?  What happened to the building, etc.?]

[Any connection to Camron-Stanford house? Possible -- still searching. William W. and Alice were at CS House 1876-1877, and lost their money around 1890 and divorced 1891, so it would be the right timing for it to be sold.]

According to an article in the Oakland Tribune dated 30 December 1890:

[is this place demolished?]

It appears it was used for the Oakland High School commencement in 1881:
http://books.google.com/books/about/Twelfth_Commencement_of_the_Oakland_High.html?id=tt9qGwAACAAJ

This tidbit appears in the Daily Alta California from 19 April 1888:
"The Iroquois Club has secured quarters in the Camron Hall Building, on Fourteenth Street. Underneath is the Postoffice."

The SF Call, 27 November 1890 says:
"Henry R. Miller has mortgaged to the Regents of the University of California the Camron Block on Fourteenth street, between Broadway and Washington, for $51,000. He has also deeded the same property to Antoine Borel, subject to the mortgage. Miller is a mining man, and recently purchased the Camron Block, which he remodeled from a theater to a lodging-house and changed the name to Park House."
So that's probably the end of it by the name Camron Hall.