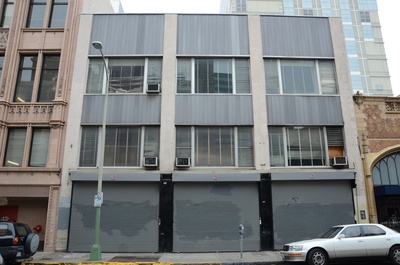 The Capwell-Barber Building (named for H. C. Capwell and Edgar H. Barber) is located at 422-30 Fifteenth Street, Oakland, California. The Beaux Arts derivative building was originally designed by architect Reed & Corlett and built by F. A. Muller. In 1958 the building was remodeled remodeled as a Moderne store building by Burnham Construction.

"This is a three story reinforced concrete commercial building on an interior lot. As remodeled in 1958, it has a sharp edged rectangular late streamlined stucco, metal and flagstone facade. The building is three bays wide, with banks of three part aluminum sash windows on the upper floors, and one small and one large storefront.

The 3 by 3 structure is the only visible vestige of the original facade, which had elaborate Beaux Arts terra cotta surfaces, and bands of three part windows on the mezzanine and upper story. The wood sash and turned mullions have been replaced, but it is likely that part of the terra cotta survives under the newer surfaces.

This building was constructed as a "department store for H. C. Capwell Company," leading Oakland dry goods business whose main store was then located on Clay Street west of City Hall in the now vanished retain quadrant of Downtown Oakland. It is no longer compatible with the historic character of the downtown district, but if restored could contribute as a representative of Reed & Corlett's work and patterns for 1920s downtown development.

This historic building is #53 on the list of District Contributors/Noncontributors for the Downtown Oakland Historic District Registration Form. The Capwell/Barber Building is a non-contributor due to the remodeling." 1