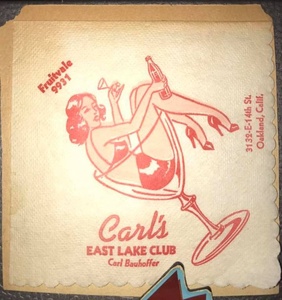 photo courtesy Owen BlyBauhofer was born November 4, 1889, in Schattdorf, Switzerland, to Nicholas Bauhofer and Caroline Baumann (Bauhofer), one of 9 children. His oldest brother Joseph Bauhofer emigrated from Switzerland in 1903, and started Golden Eagle Swiss Dairy in Alameda and Oakland. In 1921, they sold that and bought into the Innes Dairy in Centerville (now part of Fremont). 3 Both dairies were sometimes referred to as Bauhofer Brothers Dairy.

In 1910, Carl immigrated to the U.S., and spent some time working at his brother's dairy. The 1910 census shows him living with Joseph and his wife, Emma, and their brother Nicholas and sister Agnes.

His WWI draft card lists 3602 E14th St. as his address, and "milk dealer - business for self" as his profession. Similarly, the 1920 census lists him as the proprietor of a creamery (dairy) and a lodger at 3515 E14th St.

By 1930, he had become the live-in manager of the Alpine Hotel at 1479 Fruitvale Avenue. The 1935 directory lists his address still at the Alpine Hotel, but now his profession is listed as bartender. It's not clear exactly when he opened the lounge, but there's an April, 1934 application for a cabaret permit at 3101 East 14th. 4

But by 1940, there were more changes. The census lists him as a tavern proprietor, living at 2801 East 16th St., and married to Nadine E. (Bauhofer), a woman 25 years his junior. His WWII draft card from 1942 confirms the marriage, his address, birth date and profession. Nadine worked at H. C. Capwell's as a saleswoman.

From there the trail starts to get harder to follow. The 1951 and 1957 directories list his address as 3643 Lyon Avenue, but no profession, and no mention of Nadine. But Carl's Lounge is still listed at 3132 East 14th St.

Carl died March 24, 1968. I haven't been able to find his obituary or burial location. Nadine is buried in Evergreen Cemetery in the Garden of Faith plot. 2 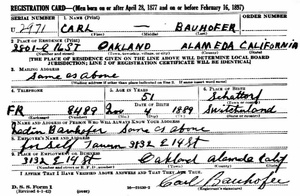