Cars are expensive, dangerous, and unsustainable. But it is very much possible to transition to a car-free lifestyle. For the purposes of this article taxis shall not be included in the definition of "carless" and taking taxis everywhere can be really expensive.

Here are some ways you can get around without a car:

Transfers are an advanced bay area transit technique. If you use a clipper card, the transfers are applied automatically so you can hop between different systems, like AC Transit to BART to Caltrain to SamTrans to VTA for whatever twisted reason.

Getting to Airports Really Early

You were at your computer, booking your flight, and you thought to yourself: oh that cheap 07:00 flight doesn't seem so bad, I'll just wake up early and save some spacebucks! Except for one huge problem: BART doesn't start running until as late as 08:00+ on Sundays. If you need to get to SFO for an early flight even on a weekday you probably won't have enough time taking BART but OAK might be do-able. Usually the security gate doesn't even open until right before the early flights so you might have to take a nap in an airport chair. Early flights the worst.

Getting to OAK Early

There are 2 ways to get to OAK early without a car: BART+AirBART or AC Transit.

Here are the hours when AirBART is operational. You will need exactly $3 in cash or $2 for discounted children/senior/disabled fares.

Sunday
8:00 am to 12:00 midnight every 10 minutes - See more at: http://www.bart.gov/guide/airport/inbound_oak#sthash.HZjPdUjY.dpuf

The other way to get to OAK really early on a Sunday is to take the 805, which departs from Eastmont Transit Center and goes directly to the airport terminals. Pretty much the only other people riding the bus work the early shift at the airport.

Getting to SFO Early

Catching a taxi all the way to SFO is ABSURDLY expensive. Juggling buses will be more complicated but it will cost you 1/15th to 1/20th as much.

The 800 bus runs every hour from downtown outside 12th street. If you are in East Oakland you can transfer from the 840, which runs all night from Eastmont Transit Center to 12th Street Station. The 800 heads straight up 12th onto the highway and over the bridge to 11th and Market in San Francisco. From there, you can hop on the 397 which is labled "Palo Alto Transit Center".

The trick of the 800->397 transfer is that the 800 will drop you off in a spot where the 397 stop is not immediately obvious. Head up Market to 11th street on the southeast side. The bus stop will be on 11th just off Market and has a roof and digital bus timetable display. The building across the street from the bus stop is a big brutalist building with a McDonalds in it and tapered cubes on the lower facade.

Getting to San Jose or Santa Cruz

You can take BART down to Fremont and then catch a bus waiting at the Fremont station to the Diridon Station in San Jose. From there hop on the Highway 17 Express, an inter-city bus operated by Amtrak. It costs $4 and has a bike rack and free wifi.

Using a car without owning a car

Official and unofficial car sharing is prevalent in Oakland as in other parts of the Bay Area. This is a convenient option if you need to travel further than you'd can quickly to walk/bike/transit or have a lot to carry. This is not a good way to get to the airport because you have to return the car to the same location where you picked it up. If the car is insured, as with all mentioned below, you're mostly covered, though you may have some liability if something happens.

Getting out of town 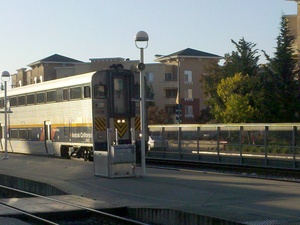 photo CC SA-BY Our OaklandAmtrak is an expensive and slow way to get to a few locations throughout California and other parts of the country. Perhaps, the scenery is worth it. There is usually enough room to bring your bike on board (recommended if you're going to San Jose or Sacramento). The Emeryville Station is the most convenient for North Oakland and West Oakland, the Coliseum Station is the best option east of the Lake, and everyone else should take the Jack London Square Station. Amtrak's Capitol Corridor is a very convenient way to get to Sacramento, and offers free wireless on board, and nice views of Oakland, Berkeley, and the Sacramento River delta along the way.

Greyhound and Megabus are two ways to get out of town via bus that vary in price and comfort. Neither offer a consistent way to transport bicycles without disassembling and packaging it. Greyhound also has a Greyhound Express service with newer busses, free wireless, more legroom, etc. and fares as low as $1. They don't go everywhere, but a nicer way to travel than the standard bus.

Flying out of OAK, SFO, and SJC will get you almost anywhere in the world in under 40 hours (if you're going to Burundi for example).

If all else fails, and you need a car for multiple days (carsharing is not affordable for more than a few hours) you can rent a car from Hertz Local Edition, which have relatively cheap rates and locations in Emeryville, Auto Row, and Downtown Oakland. If you live close enough, they'll pick you up for free.