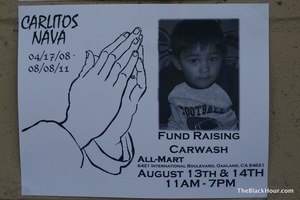 photo CC BY-NC 2.0 by Black Hour
Carlos Nava was a 3 year old victim of a drive-by shooting in East Oakland.  On August 8th of 2011 at around 1:15pm Carlos Nava and his Mom were grocery shopping at a store on International Blvd and 65th Avenue in Havenscort/Lockwood-Tevis when a car drove by shooting at two men standing on the corner. The two men were shot and wounded and Carlos was caught in the crossfire, who was in a stroller and was hit in the neck by a stray bullet. Nava died and it made him one of the youngest victims of gun violence in Oakland's drug and gang wars.

Community outrage at such a horrible killing put pressure on Police to make an arrest. A few weeks later two suspects- Lawrence Denard, 26, and Willie Torrance, 22, were arrested and charged with Carlos Nava's murder. A witness came forward and said the two were seen in the car when the shooting happened. It is believed that the two were members of a gang called 65ville and they were shooting at some rival members of another gang- the two men who were injured when Carlos Nava was caught in the crossfire.

A mural was painted on the side of Bay Coin Laundry, the site of Carlitos' killing.