Oakland is home to six Carnegie libraries, five public libraries plus a library at Mills. Over 2,500 libraries around the world were built with grants from the Carnegie foundation.

The former main library, which later became known as the Charles S. Greene Branch and now AAMLO, was built with a grant of $50,000 from businessman and philanthropist Andrew Carnegie. 1 Oakland later received a grant of $140,000 from Carnegie to build four branch libraries. 2 Mills College also received a Carnegie grant of $20,000 for a library that was designed by Julia Morgan, and named after Andrew Carnegie's daughter, Margaret Carnegie. 3

Oakland received a grant largely because of the efforts of resident Henry A. Chittenden. 4

The Carnegie library buildings in Oakland are: 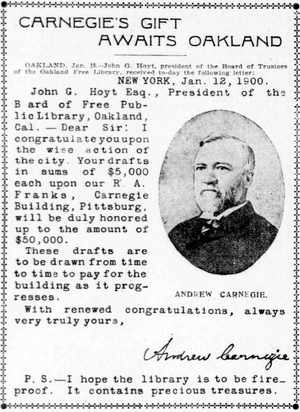