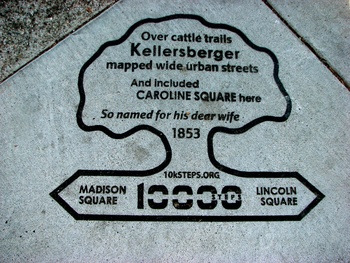 The Square appears on Kellersberger's map of Downtown Oakland as being located between 8th and 9th Streets, Madison and Oak Streets. At some point this became known as Oak Street Park, and was then renamed Madison Square, bordering the present-day Madison Square. 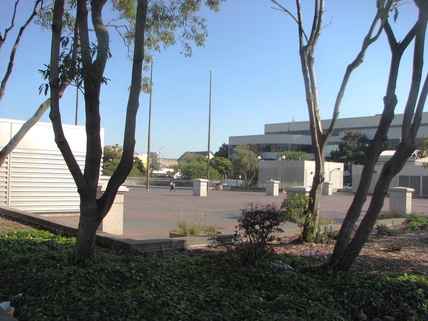 Historical records and newspaper articles of the time state that the Oakland City Council passed an ordinance rename Caroline Square to Lincoln Square in 1871. On “December 4, [1871] an ordinance was passed changing the names of Caroline square to Lincoln square …” 1 However, it appears that either the articles and records were in error, or the City simply did not carry through on this renaming. The Thompson & West Atlas prepared in 1878 showed that this block was called Madison Square, and by 1892, the name Lincoln Park had been applied to the former Oakland Square  between Harrison and Alice Streets, 10th and 11th Streets.3

The 10,000 Steps Park Research Archive online explains the historical background on both Caroline Square and Madison Square Park. Caroline Square was a city park, up until at least 1892, as there is a photo to that effect in the Oakland Library History Room. At some point, Caroline Square park, which was situated one block to the east of the present day Madison Square, was renamed. In 1965 BART was given the park through eminent domain for their headquarters. But "in order to preserve the park’s presence, many houses and a church were destroyed so that a new Madison Square Park could grow nearby." 2