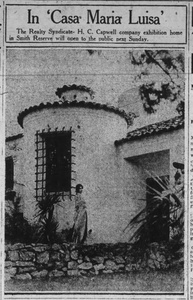 The furnishing by H.C. Capwell

In the four months since it opened  "50,000 visitors have made Casa Maria Luisa famous and placed it high amongst  the leaders of better homes about the bay". 3  Oakland Tribune April 27, 1930