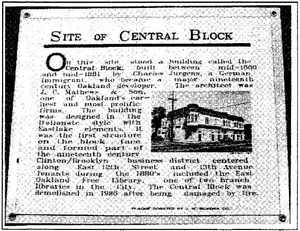 Scan of copy of picture of plaque, Historic Preservation Element

This was built in what is sometimes called the East Peralta neighborhood between 1880 and 1881 by Charles Jurgens, a major Oakland developer of the 19th century. It was designed by the architectural firm of J. C. Mathews & Son (Walter J. Mathews), in an Italianate style with Eastlake elements to the building, the Central Block was located at 1102-1118 East 12th Street in Oakland.

In 1986 the building was demolished after being damaged by a fire. The Landmarks Preservation Advisory Board and the property owner installed a marker in 1990 at the site with a brief description of the history, as a prototype for a citywide Landmark plaque program.1 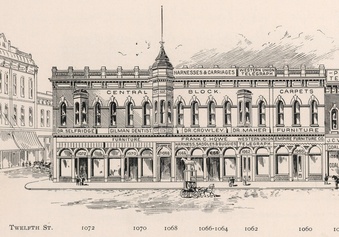 from Illustrated Directory of Oakland 1896 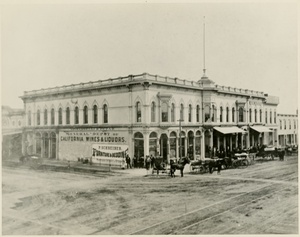