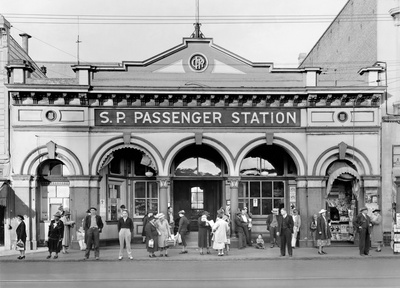 Photo circa 1938;
After Southern Pacific began leasing from CPRR, prior to Mi Rancho conversion 2

Originally constructed in 1873, this building at 464-468 7th Street (near Broadway) was the original Oakland train station for the Central Pacific Railway and served as the western terminus of the new transcontinental railroad. Passengers for San Francisco continued on a few short miles to the ferry terminal on CPRR's Oakland Long Wharf for transportation across San Francisco Bay. The land for the station was donated by the City of Oakland.

In 1885 Southern Pacific took over the Depot.

In 1912 SP opened the new and much larger 16th Street Station and all trains except local service moved from this station (then called the Broadway station) to the new station. In 1939, the building became the new location for the Mi Rancho market, which was still in operation at the site when the building was designated as Oakland Landmark #65 under Zoning Case LM 82-309 on November 9, 1982. The SP's Interurban Electric Railroad (IER) used the tracks from about 1911 through 1939, and then the tracks were abandoned in 1941. 3 The tracks were used by the Key System from 1943-1946 before being completely abandoned, but it does not appear that the Key System used this station during that period. 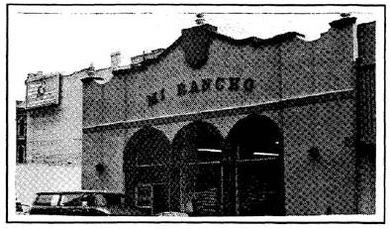