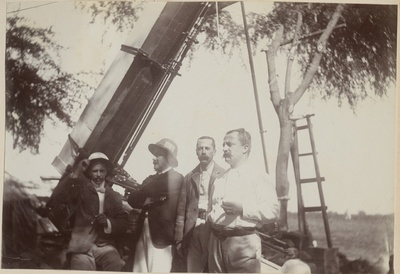 Burckhalter (2nd from right) on solar eclipse expedition in India
image Courtesy of Chabot Space and Science CenterCharles J. Burckhalter (January 5, 1849 – September 20, 1923) was an astronomer and the director of the Chabot Observatory from its beginnings in downtown Oakland, a position he held for 38 years. He is noted for inventing an improved apparatus for photographing solar eclipses. 11, 14, 15 Because of increasing light pollution, under Burckhalter's direction the observatory was moved to the location on Mountain Boulevard.

Charles Burckhalter was born January 5, 1849, in Taylorsville, Ohio. In 1866, he and his brother Frederick Burckhalter (1835 – 1880) moved with the family to Truckee, CA. In 1875, Burckhalter and Charles Fayette ("C. F.") McGlashan (who interested Burckhalter in astronomy) plumbed Lake Tahoe with a champagne bottle to measure its depth. The number they got (1,645 feet) was later confirmed by the official U.S. Coast and Geodetic Survey measurement. Burckhalter moved to Oakland in 1877 2 and went to work in the insurance business for the California Fire and Water Proof Paint Company of Oakland. 12

In 1878, Charles married Catherine "Kate" Mary (Burckhalter), and they had five children: Francis "Frank" Lucien Burckhalter, Charles W. Burckhalter, Emma May Burckhalter, and twins Edward Young Burckhalter and Robert Nash Burckhalter. In 1908 they lived at 1224 Linden Street. At the time of Burckhalter's death in 1923, they lived near the observatory at what was then identified as 1475 Mountain Boulevard in Leona Heights. 7 Note that the 1921 Oakland directory spelled his name Burkhalter (e.g., without the "c") and stated that his home and the observatory were both located near Calaveras Avenue in Leona Heights, while the 1922 directory stated that his home was on Mountain Boulevard, but with mail delivered care of Rural Delivery box 222. 8 9

Charles and Kate's son Frank graduated from Oakland High School in December, 1896, while Jack London graduated in June of that year.

When it was first created, the Chabot Observatory was under the direction of the board of education. In 1885, Burckhalter was appointed to teach geography and astronomy at Oakland High School and to direct the observatory. 4

Burckhalter was one of the founding directors of the Astronomical Society of the Pacific in 1889 3 and served as its president in 1896 and again in 1909. 1 Burckhalter supervised several expeditions to view and photograph solar eclipses, including one to India in 1898. Burckhalter was friends with Edward S. Holden, the first director of the Lick Observatory on Mount Hamilton near San Jose.

While astronomy was his foremost love, Burckhalter was interested in all sorts of scientific endeavors. Following the 1906 earthquake, he was appointed to the State Earthquake Investigation Committee by Governor George C. Pardee. 13 Burckhalter had convinced Pardee to donate a duplicate lens for the solar eclipse expedition to India in 1898.

In 1909, the school department had just acquired a new Kissel automobile. Superintendent John W. McClymonds was driving Burckhalter and county superintendent of schools G. W. Frick when the car struck a trolley pole at East 14th Street and 24th Avenue. Burckhalter's head hit the windshield and cracked it, but he was not injured. 5 It was not the Burckhalters' only mishap involving automobiles; in 1908, Catherine Burckhalter was hit by a car as she stepped into the street at 14th and Broadway. She was badly shaken and received a strained back, and taken to the hospital. 6 It was not Mrs. Burckhalter's first bad luck with transportation, though. She escaped with bruises after a carriage accident in 1906. 10

Under Burckhalter's direction, in 1913 the observatory acquired the 20" telescope "Rachael", and in 1915 moved a new facility on Mountain Boulevard. 4

Charles Burckhalter dedicated his life to the Chabot Observatory and educating people about the universe. He tried to retire several times, but each time the board of education refused his resignation.

Burckhalter died at home in Leona Heights on September 20, 1923 from "either a stroke or a heart attack which may have been due to his agitation over a raging fire that was approaching his beloved observatory." 2 He had been in poor health for some time, and did not, as some papers proclaimed at the time, personally oversee the battle against the fire. 4 Mary Catherine and Edward are buried in plot 48 Mountain View Cemetery. [ still need to confirm final resting place of Charles ]

Burckhalter Elementary School was named in his honor, and dedicated December 3, 1925. 2