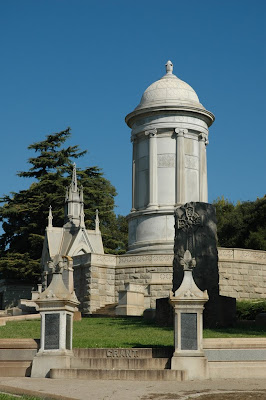 Crocker mausoleum
photo from Our Oakland

Charles Crocker (September 16, 1822–August 14, 1888) was one of the “Big Four” founders of the Central Pacific Railroad. He was responsible for supervising the construction of the western portion of the first transcontinental railroad, and (partly due to a shortage of uninjured men so soon after the Civil War) relied on Chinese laborers for much of the work. (There is debate over to how well treated and/or -paid these workers were – but at the time, the very idea of importing immigrants to do the work of white men provoked outrage.) Crocker was blasé about this and replied, ”Well, they built the Great Wall, didn’t they?”1 He also said, “We none of us knew anything about railroad building, but at the same time were enterprising men, and anxious to have a road built, and to have it come to Sacramento.” 2

Charles acquired a controlling interest in the Woolworth National Bank in San Francisco for his son, William. Woolworth became Crocker-Woolworth, and eventually became Crocker Bank, which was bought by Wells Fargo in 1986.

It’s hard to miss Crocker’s ostentatious tomb, since it is quite likely the largest pile of stone on Mountain View Cemetery’s Millionaire’s Row. But beyond that, what else is there? Crocker maintained quarters in NYC and San Francisco, and today, his enormous Sacramento mansion is an art museum. Oakland’s Crocker Highlands neighborhood (named by its developer, Wickham Havens) reportedly bears that name because it had formerly been Crocker’s investment property (along with, it must be noted, vast swaths of California, due to his many railroad deals). The guy never even lived here. Well, I guess there used to be Crocker Bank, so …

Crocker was badly injured in an 1886 carriage accident in New York. He never fully recovered, and died two years later in Monterey. According to the American National Biography, of his estimated $20M loot pile (more like a half-billion today, and at that time about 1/600th of the US GNP1) Crocker left “nothing to charity … nothing to public institutions of any kind.”

He is interred in the Crocker Mausoleum at Mountain View Cemetery on Millionaire’s Row, next to the mausoleum of Samuel Merritt. Charles Crocker’s wife Mary commissioned architect A. Page Brown to design the Crocker monument following her husband’s death in 1888.