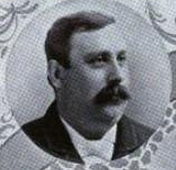 Charles Pierce was born in Erie, Pennsylvania. The family moved to California in the 1870s and in 1879 Pierce's father, Dexter Pierce started a hardware business with his sons that became very prominent.4

Pierce was a well-known businessman and was elected on an independent businessman's ticket. In 1889, the Democrats wanted Pierce to run on their ticket but he declined which apparently made them very sad and a little bit desperate as he was their only hope.7

Along with his brother, W. Frank Pierce, Charles was affiliated with the Standard Electric Company and the Stockton Water Company. Pierce owned lots of land in Stockton, the Mandeville island and the Pierce land and stock company.  Pierce also owned Rough and Ready island, near Stockton.5 The brothers were also bankers. They were involved in banking innovations- they brought the National cash register to the west coast (which made them a lot of money) and owned a patent to a self-computing scale.3 Pierce was a director of the Central Bank of Oakland from the founding of the bank and served as a director of the Central National Bank.6

Pierce died of kidney disease at age 50. He had the disease for about 10 years, but a 1909 accident in a horse-drawn "turnout" brought on a flareup of the disease which killed him. He died in Stockton.2

Pierce was a member of the Scottish Rite Masons.