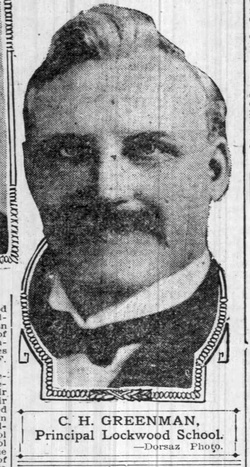 Charles Hydorn ("C.H.") Greenman (July 21, 1864 – September 15, 1919) was an educator and principal of Lockwood School in what was then Fitchburg, and the namesake of Greenman Field. He died from a heart attack while saving two students from a grass fire in the schoolyard. 1

Greenman was also noted for starting a student band at Lockwood School c.1900. 5,6 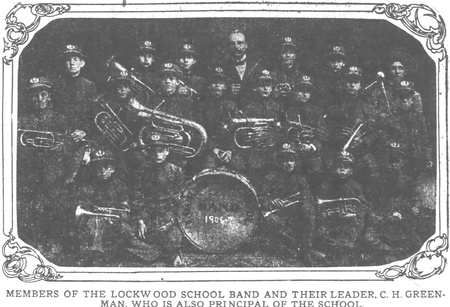 In 1909, Greenman was accused of brutality for beating 9 year-old Hugh Chandler. Corporal punishment was fairly common in schools in those days, but the San Francisco Examiner and San Francisco Call had very different takes on what happened. The Examiner led with "Lad Beaten for Lingering on Grounds", and included photos of Chandler and Greenman, as well as a drawing of man angrily beating a small child with the caption "Nine-Year-Old Schoolboy Receives Cruel Flogging." 7 The Call, on the other hand, led with "Citizens Resent Libel on Teacher", and quoted Chandler's father contradicting most of the statements from the Examiner:

"My boy was whipped by the principal," said Chandler tonight. "That much of it is true. I don't know what the principal whipped him for. I supposed he had a right to do it, and I did not ask. The boy probably deserved it. And while I think he was pretty severely punished, he was not seriously hurt. He was not numb or dazed with pain, as the papers say, nor was he compelled to go to bed. We did not have any doctor to attend him. On the contrary, he went back to school." 8

Presumably Greenman was found not guilty, because he was principal for another 10 years.

On September 16, 1919, there was a grass fire in the Lockwood School yard. Two small boys were cut off by the fire while trying to fight it. Greenman dragged them to safety, but was overcome by the heavy smoke. He lay unconscious for an hour while teachers searched for a doctor. They finally called the police, who sent officers and an ambulance. Greenman was taken to the emergency hospital, but efforts to revive him failed. 1

Greenman's ashes are at Chapel of the Chimes. 4

There were immediately calls for the city to honor him: name the soon to be built Lockwood junior high school for him, name the athletic field for him, or make the principal's office into Greenman Hall. 3 Naming for the field for him happened, but not until 30 years later, when the modernized area was re-opened as Greenman Field. 2