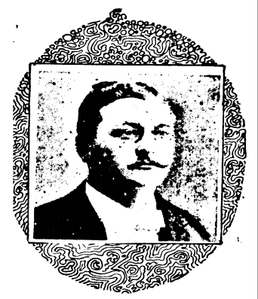 Kramm Jr was the son of Charles Kramm, Sr., who was born in Germany and came to Oakland in 1860.

Charles Kramm, Sr. was the proprietor, along with Joseph P. Dieves  of the Oakland Brewery which started off at 9th and Broadway, but later moved to Telegraph and Durant (now 19th Street) after purchasing an interest in the company and expanding to a much larger three story brick facility in 1869 where they produced 10,000 barrels of beer annually.  Mr. Kramm lived at or near the later location at 1414 Telegraph). 1 After Kramm retired, he sold the Oakland Brewery to the San Francisco Breweries, Limited. 5

Kramm's estate was estimated at $152,565. 6 After his death a war broke out between his widow Augusta and the widow of one of Kramm's four sons. For two years the women fought over the will and for two years the newspapers dutifully recorded it. 3 Mrs Kramm was later involved in another lawsuit when her new husband, Mr Simons, who was involved with Anchor Brewery with Kramm, Jr in Temescal, sued for divorce on the grounds of cruelty and abandonment. It was said he had only married her for her money. 4 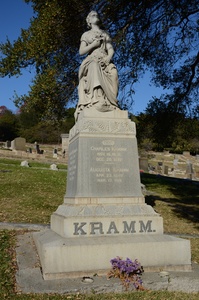 CC SA-BY Our OaklandKramm, Jr. was married and had one child. Charles died of tuberculosis in 1892. He was sure he wasn't dying, so he did not follow doctor's orders to go to the mountains to clear his lungs and instead stayed home with his business. 7 After his death, his widow and executor of his will sold Anchor Brewery to Augusta Simons for about $18,000. It appears he had already mortgaged the business to her and that the business was insolvent. No one else would buy it. 9

Charles Kramm, Jr. is buried in the family lot in plot 30 of Mountain View Cemetery, along with Charles, Sr., Augusta, and various other family members.