Charles Frederick Mau (1838 – April 27, 1915) was an architect and construction supervisor, active from at least 1877 to 1908. In addition to several notable buildings in Oakland, Mau also designed the Masonic Lodge in Alameda in 1890. 1

Mau was born in 1838 in Hamburg, Germany. After serving in the Franco-Prussian War, Mau moved to Nevada in 1871, where he got involved in mining. 3,4 In 1873, he moved to Chicago and became an architect. Shortly after that he moved to Oakland, where he lived the rest of his life. 2 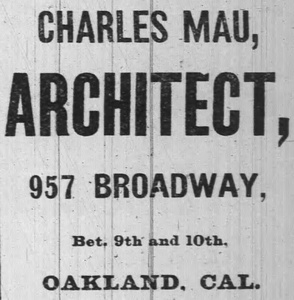