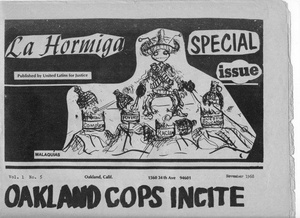 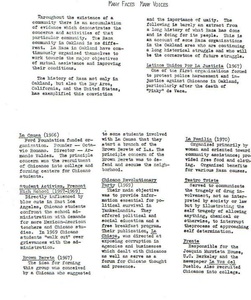 Many older Chicanos in Oakland will agree that Mr De Baca's death was a focal point in the radical Chicano mobilization in Oakland. Some say it was the start of the radical elements of the Chicano movement in Oakland.

On February 5, 1968 Oakland Police Officer Walter Gibbons noticed a man in a car on 35th Ave near Galindo St in the Fruitvale district. Officer Gibbons confronted the man and a foot pursuit happened. The man ran up Galindo St and Officer Gibbons ordered him to stop. Then he fired 6 rounds. One of the rounds hit the man in the heart, killing him. The man shot turned out to be Charles (Pinky) De Baca .

Oakland Latinos United for Justice continued working in the community starting a local newspaper called "La Hormiga" which translates as "The Ant." Officer Walter Gibbons was acquitted of any wrong doing. by who? Other Chicano radical groups formed like the Brown Berets and the Chicano Revolutionary Party to protect the community from police brutality and to educate Chicanos and Latinos of their rights.