The Charros Club was a short-lived social club, intended to be a “meeting place for business and professional men, artists, writers and musicians” and to “perpetuate the spirit of the early west.” It was at 418 - 11th Street in the Hook Brothers Building. It held its opening night on April 7, 1908. The officers were Adam H. Shirk, alcalde (magistrate), W.H. Kiler, sub-alcalde, Charles H. Williamson, secretary-treasurer. 1

Will McCutcheon is listed as the alcalde in May 1909 when he married Sophie Waters. McCutcheon was also secretary-treasurer of Hook Brothers & Company furniture. 5 The Hook Brothers retired in 1910 after 30 years in business, and leased the building to R. Pozzi and F.B. Moore, 6 but the end for the club was already underway.

The Charros Club and numerous other newly formed social clubs were under investigation, being viewed by some as a way to skirt liquor license laws. 7 It was noted in another article a few years later that for a number of clubs like the Charros Club, the free license was granted to people who were no longer part of the organization and they had passed into other hands. 8

By 1914, the only remaining newspaper references to the club are articles about gambling. 9 It's unclear how long the club operated by its original charter. 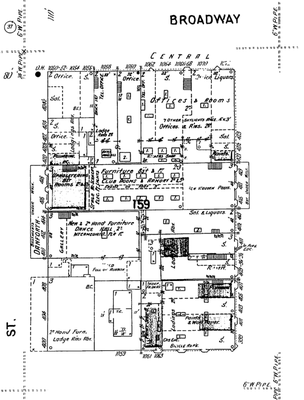