Children's Hospital & Research Center Oakland is a nationally recognized leader in children's medicine which provides outstanding medical services to infants, children and teens from throughout California, and is the only independent not-for-profit regional medical center for children in Northern California. The staff, physicians and experienced professionals from over 30 pediatric specialties care for tens of thousands of children on an annual basis. 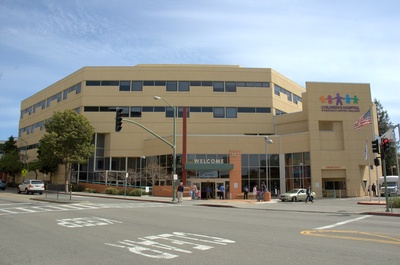 Children’s Hospital Oakland is a national leader in many pediatric specialties and sub-specialties including hematology/oncology, neonatology, cardiology, orthopedics, sports medicine, and neurosurgery.

Originally, the hospital began as the brainchild of Bertha Wright, an Alameda County nurse, Miss Mabel Weed, a social worker, and other Bay Area women including Jessica Peixotto and Jean Howard McDuffie, back in 1912. They envisioned the first West Coast hospital for babies and children, with no consideration as to their economic background.

By 1914 the group of women established the Baby Hospital Association, formed a Board of Directors (all male) and raised $12,500 for the purchase of the McElrath estate at 51st and Dover Streets. The mansion's stables were cleaned out and on September 6, 1914 officially opened as the Baby Hospital with 38 beds.

Hospital rates in 1914 were $2.50 for a private room and only $1.00 for a bed in the wards, while families unable to pay for treatment of their children were not charged a fee. The Baby Hospital cost $2,000 a month to operate, though only $800 was supported by fees from patients, or city and county contributions. Donations were collected by the women of the Baby Hospital Association. 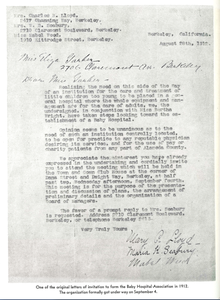 poem for fundraising by Bertha Wright
courtesy of K. Bodding

The male Board of Directors seized control of the Baby Hospital in the late 1920's, and relegated the founding women to auxiliary roles. The women’s auxiliary group called the Branches has advocated for the hospital and raised millions of dollars throughout the 100 year history.

In 1926, the hospital introduced a medical education program to train future pediatricians.

In 1948 as the Baby Boom swept the country, the hospital added a new wing, increasing patient capacity to 142. The new wing was designed by Douglas Dacre Stone of Stone and Mulloy.

In 1959, the hospital built a research center to advance the care of children in the community and throughout the world.

Bertha Wright was interviewed in 1967 and reminisced about the obstacles she and the other women had to overcome in order to make their dream a reality.

Children's Hospital Oakland is a nationally recognized teaching hospital, and currently the Children’s Hospital Oakland’s Pediatric Residency program has 88 medical residents and has trained more than 1,000 pediatricians over the years. The resident physicians' union has been fighting for a new contract since April 2013 and entered federal mediation in spring 2014.

The research center is now known as the Children's Hospital Research Institute (CHORI). It has over 300 scientists working on 150 clinical trials, and is the only non-university-affiliated pediatric medical center in the United States to have a research institute of this magnitude, with a yearly institute budget of more than $47 million.

Children's Hospital also runs the Children's Hospital Family House, low-cost housing for families of patients who live more than 70 miles away. It serves as a "home away from home", and includes 16 bedrooms, a common kitchen, living room, and playroom, as well as a garden in back with a play area for children. The garden and play area were constructed by Oakland Firefighters Random Acts.

All children are served at Children Hospital Oakland as there is no public pediatric hospital in either Alameda or Contra Costa counties. As the "safety net" hospital for both counties, as well as patients with private insurance, no child is ever turned away due to a lack of funds.

Between 2006 and 2010 Children's Hospital lost over $80 million, in part due to 73 percent of its patients on Medi-Cal, with much lower reimbursement rates.

Approximately 1% of the hospital's staff was laid off in 2010, and the outpatient services were restructured. Children's Hospital also launched an ambitious $425 million campaign to rebuild and modernize the campus by 2019, and administrators are working on a long-term partnership with University of California, San Francisco.