The Chinese Exclusion Act was a US federal law signed by President Chester A. Arthur on May 6, 1882. It prohibited all immigration of Chinese laborers, and those Chinese already here had to register or risk deportation. It was the first federal law implemented to prevent a specific ethnic group from immigrating to the United States.

It wasn't repealed until December 17, 1943. This had a profound impact on Chinese Americans in Oakland, and is part of the story of many families in Oakland.

The first significant Chinese immigration to the US was during the Gold Rush (1848–1855) and then as labor for projects like building the first transcontinental railroad (1863–1869). In the 1870s after the Civil War, the economy declined, and some people politicized anti-Chinese animosity.

But even before that in 1858, the California Legislature passed a law that made it illegal for any person "of the Chinese or Mongolian races" to enter the state; the law was struck down by the State Supreme Court in 1862. California adopted a new Constitution in 1879 which explicitly authorized the state government to determine which individuals were allowed to reside in the state, and banned the Chinese from employment by corporations and state, county or municipal governments.

The Page Act of 1875 prohibited the entry of immigrants considered "undesirable" which included any individual from Asia who was coming to America to be a forced laborer, any Asian woman who would engage in prostitution, and all people considered to be convicts in their own country. Rep. Horace F. Page (R) introduced it to "end the danger of cheap Chinese labor and immoral Chinese women"; women immigrating from China were forced to prove they were not now, had never been, and would never be prostitutes. 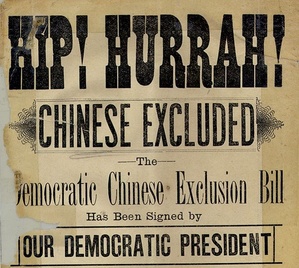 All of this led to animosity and sometimes violence against people of Chinese descent, regardless of their legal status. It also left "legal" immigrants in a bind: they could either rejoin their families in China, or they could stay in the US alone. One effect of this and the Page Act was that many early Chinatowns were largely bachelor societies.

Barriers to legal immigration led many to seek other means. Those coming in on fake papers (which stated they were blood relatives of US citizens) became known as "paper sons." The 1906 earthquake led to a sharp increase in this practice, because official records were destroyed in the earthquake and resulting fires.

Although the repeal of the Chinese Exclusion Act in 1943 was a step in the right direction, it was largely symbolic. Immigration of Chinese was limited to 105 people a year—the minimum for any group under the quota system then in force. Larger scale immigration of people of Chinese descent didn't increase significantly until the Immigration and Nationality Act of 1965.

Locally, the act and its impact are remembered in the Alice Street Mural Project, with "Remember 1882" included on a panel.