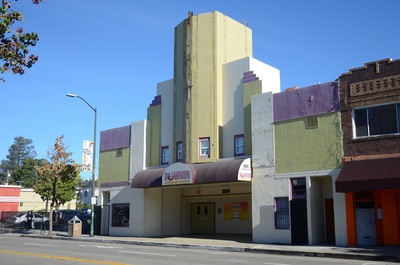 Cine 7 Theater was a movie theater in the Laurel District. Originally named the Laurel Theater when it opened in March, 1939, it was designed by Alexander A. Cantin. It was renamed the Cine 7 in 1962, and they briefly tried showing art and foreign films before reverting to more standard films. 1 The theater closed around 1984.

In the early to mid-1970s the Cine 7 theater was very popular with the local youth as they offered a double feature for the low price of fifty cents. One popular pairing was "Jaws" with "American Graffiti" for an entire week in 1975, with groups of local teens going every night to see how many times they could sit through the double billing!

At some point it was converted into a church, the Dominion Christian Center.  The building has since been torn down and replaced by a new building with street-level retail and a DaVita dialysis clinic. Not everyone in the neighborhood was happy about the plans. 2