The Oakland City Charter is the primary document that enacts and charges the City Government of Oakland with performing duties and sustaining institutions for the public benefit.

The current charter went into effect January 28th, 1969, and has been amended frequently since then. The current City Charter can be seen here.

The previous charter had gone into effect December 22nd, 1932.

note: changes below may have subsequently have been changed. 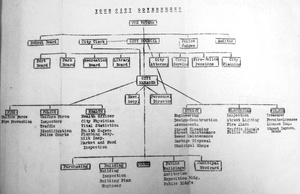 1931 org chart with voter at the top. no mayor listed. photo of chart in the book of the 1931 charter, available at the Oakland History Room