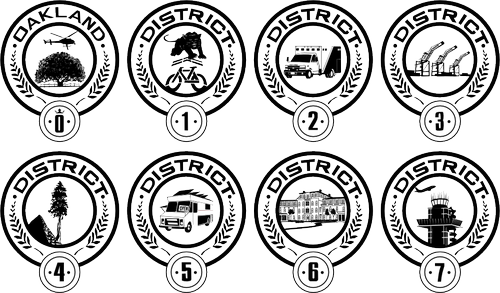 CC-BY [svg] The 7 districts of Oakland along with the unofficial district emblem. 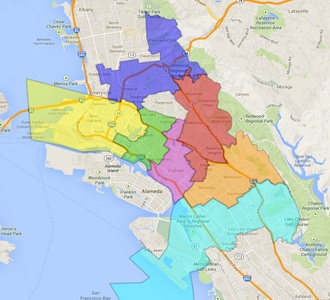 Oakland is divided into seven city Council Districts and is currently represented by eight City Council members - one for each district and one at-large member.

City Council districts are political divisions that determine City Council representation. City Council members are elected one per district, with one at-large council-person who is not tied to a district. As a result, it’s really important to know what City Council District you’re in to help you make decisions about who to vote for during City Council elections.

Here’s what the city charter has to say about how districts should represent Oakland in order to get good representation on City Council:

As indicated above, every 10 years (or when significant changes in territory occur), Oakland goes through a redistricting process. 2013 is one of those years. We’re in the middle of redistricting! The process can have big implications for the future of representation, so check out the redistricting entry to get educated!

What district am I in and who is my council member?

Use this tool to find your district and council member: http://gisapps1.mapoakland.com/councildistricts/

Learn about your District!

Sources of data and maps

Want to improve this entry? This page could use…