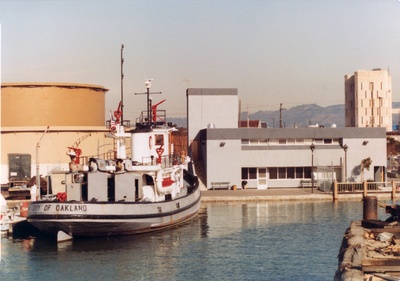 City of Oakland at Station 2 3

The City of Oakland fireboat originally the Port of Oakland) was Oakland's first fireboat, acquired by the Oakland Fire Department and Port of Oakland in 1948. The ship had formerly been the USS Hoga, a Navy tugboat serving in Pearl Harbor.

The USS Hoga was commended for service during the attack on Pearl Harbor, December 7, 1941. Besides moving damaged ships, rescuing people from the water, and fighting fires, the Hoga was noted for helping ensure the USS Nevada didn't sink in the harbor channel, which would have blocked the entire port. 1

When the city first acquired the tug, she was fitted with two 2,000 gallon per minute pumps, 4 monitors, and 12 hose outlets. Plans were made to increase the pumping capacity to 10,000 gallons per minute. 2

Its first call came on November 27, 1948, for a fire on a former Navy tug in Alameda. OFD Lt. Willard Grimes was in command. 4

In 1963, the Port of Oakland decided it was no longer willing to pay a share of the costs. The fireboat was renamed the City of Oakland, and remained on duty. 5

The City of Oakland served until a replacement fireboat, the Sea-Wolf, was acquired in 1992, following the 1989 Loma Prieta Earthquake. 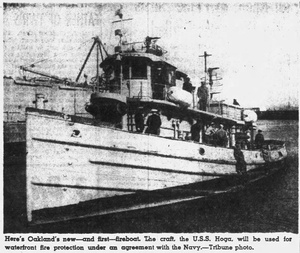 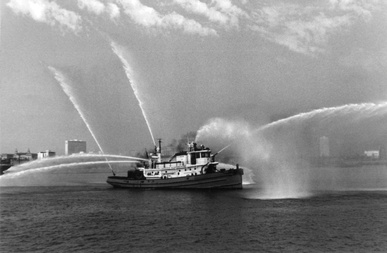