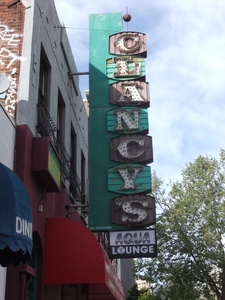 Clancy's was a bar located at 311 Broadway.

Featured Chuck Clancy, a former Broadway performer who featured singing waitresses and a honky-tonk piano player who also accompanied him singing old Irish ditties. Many of the Oakland Raiders Football Team would stop by Sunday after a Win to enjoy the festive spirit of other Raider fans on hand. One particular singing waitress would make the hair on your arms stand up singing songs from 'Cabaret' and other Broadway hits. She eventually transitioned to singing on Cruise Ships according to Patrick Clancy, Chuck's son, and former bartender. A few soldiers (male and female) would regularly stop by after evening shifts at O.A.R.B. during the Vietnam War. Chuck retired to Livermore, CA and passed away. 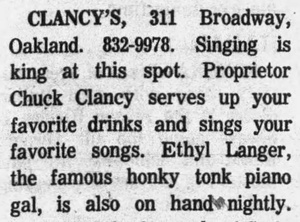 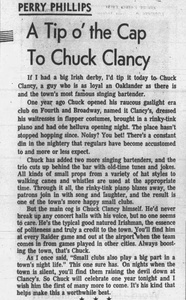