Salmon was involved in motorcycles early on, a member of various motorcycle clubs, and in 1918, he was working as motorcycle salesman. By 1921, he had opened his own motorcycle business along with Harry Wilson. Salmon and Wilson supplied 19 new Harley-Davidson motorcycles to the state police in 1930. 1 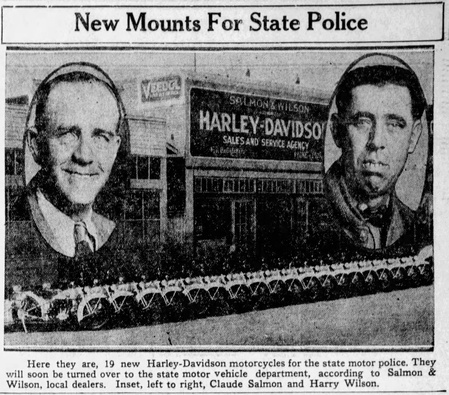 The Salmon family moved to Oakland about 1931, and Claude opened a new dealership at 3039 Myrtle Street with Windy Lindstrom in charge of the repair department. He wasted no time getting involved in motorcycle events; in October he was part of the national motorcycle hill climbing championship held in Oakland, in which Windy Lindstrom, the Pacific Coast champ, took part. 2

The family lived mostly at 5221 Manila St. In 1936, Olive married Clifford Oscar Self on April 18, 1936. A week later, Dorothy married Cliff's brother, Howard Charles Self. 3 The 1940 census lists Howard and Clifford as motorcycle mechanics, presumably for Claude Salmon Co. This was not the first brothers marrying sisters marriages in the family; Claude had married Birdie Beckham, and his brother Guy had married Birdie's sister, Pauline Beckham.

Birdie died in 1968 and Claude in 1974. They are buried in Evergreen Cemetery.