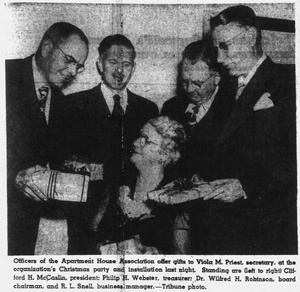 Clifford Harrod ("C.H.") McCaslin (July 15, 1898 – October 5, 1975) was a small businessman, apartment building owner, occasional inventor, and twice candidate for city council. And he was the builder of the first known bomb shelter in the Bay Area.

In 1930, the family lived at 3443 Sheffield. By 1940, they had moved to 2737 Humboldt Avenue, where McCaslin owned apartments. That complex is now known as Humboldt Gardens.

When he ran for city council in 1951, the article said he was a retired mechanic and machinist, so he was apparently fairly handy. 8

A 1930 article describes a device McCaslin created to help teach deaf children how to lip read. His daughter, Barbara, had been born deaf, and he was inspired to create the device.

“I was keenly aware of the handicap under which she was struggling, and I determined that she would have every available aid in overcoming it. I decided at the outset that she should learn lip-reading, because that is the only medium through which she can communicate with persons not knowing the sign language.” 1

After retiring from the typewriter and adding machine business and focusing on the apartment buildings, one of McCaslin's side activities was to drive around a sound truck for advertising, basically a portable public address system. Tired of breathing the dust and fumes from traffic, he created a small air filter for his car, which operated off the car battery. The writer of the Daily Knave column quipped that “McCaslin should really be able to clean up in Los Angeles.” 2 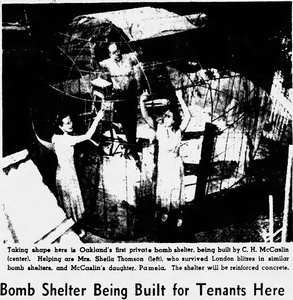 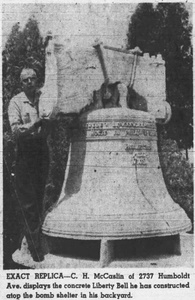 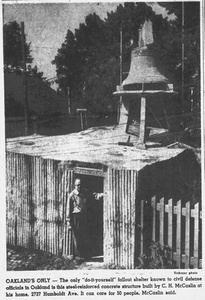 While McCaslin never gained widespread fame for his inventions, locally his most famous creation was constructing the first known bomb shelter in the Bay Area. In August 1950, he started construction of a shelter to “accommodate a total of 16 families including his own and those of his tenants.” McCaslin said he came up with the idea after talking to two of his tenants who had survived the The Blitz of London during WWII in a similar shelter. 3

In 1957, McCaslin created a 4/3rds size replica of the Liberty Bell out of concrete. He offered it to William Penn Mott, superintendent of Oakland Parks for placement in one of the city's parks. 4 The city doesn't seem to accepted the offer, as the bell was still atop the bomb shelter 2 years later. 5

The 1959 article mentions that the shelter had a gasoline-powered generator, and a water supply from a nearby, carefully covered well. 5

McCaslin later added a deck with a “Polynesian theme" atop the shelter. “Actually the patio has nothing to do with the shelter,” McCaslin said. “My wife just got after me to build a patio.” 6

The current residents of Humboldt Gardens have a website that says the bomb shelter “makes an excellent music practice room, secret gathering place and wine cellar. It has a roof garden on top that lets you scan the community from above.”

McCaslin often seemed unhappy with the government, taxes, public housing, and the rent control which had started during the WWII housing shortage. In 1950, he was a leader in the recall movement against mayor and council member Joseph Smith. As the Daily Knave said in 1950, “One of the crosses that certain Oakland City Councilmen must bear is named C.H. McCaslin. Mac, one of the head men in anti-public housing circles, is always on hand when anything of a controversial nature is developing, and he is adept at adding to the nature of the controversy.” 7

So it was probably unsurprising to some when he announced his candidacy against Smith's re-election in 1951. 8 McCaslin didn't stay in the race very long, though. After filing in January, he dropped out in the middle of March. He endorsed his former opponent, Les Grant, saying Grant's election was necessary “to halt the local trend toward socialized government at the City Hall.” 9

In 1953, there was an election for the district 6 council member; council member Clifford Rishell was entering the race for the new position of full-time mayor. 10 This was a more crowded field, with 6 candidates vying for the spot. In the primary, Glenn Hoover (the eventual winner) was the top vote-getter and W. Elwyn (Moose) Dunstan the second. McCaslin and the other candidates dropped out. 11

The aforementioned activities got McCaslin's name in the paper, but it appeared for other reasons, too. He was a founder and officer of the Smaller Business Men's Association of California, Number 1, formed in 1938. Besides objectives of uniting smaller businessman and promoting various activities, the organization's constitution limited membership to American citizens who are proprietors of businesses capitalized at less than $200,000, and no one with communist affiliations was eligible. 12 McCaslin was later elected president of the Apartment House Association of Alameda County. 13

There were more unusual articles, too. In 1935, after finding he owed nothing in income taxes, McCaslin made a voluntary donation of $35 to the U.S. government. “Personally, I do not want to be classed as a slacker in a time of war or a piker in a time of peace.” 14 A few years later, moved by the plight of Dust Bowl refugees, he offered his older seven passenger touring car to any large family from the Midwest who were ineligible for relief and had no adequate transportation of their own. 15

But by far, the most frequent newspaper appearances were letters to the editor, or "Letters to the Forum" as it was called in the Tribune. While the most frequent subjects were “socialistic government”, taxes, public housing, and rent control, which cover scores of letters, he even took the time to write in about whether it was "shave and a haircut, two bits", or the way he recalled it, “shave and a haircut, Bay Rum.” A sample of his letters are linked below:

Given his numerous letters on a variety of topics, it's unsurprising that there were responses to some of them from other writers. One noted that McCaslin seemed “mad at everyone but himself.” Another questioned why the Tribune gave so much space to McCaslin's opinions.