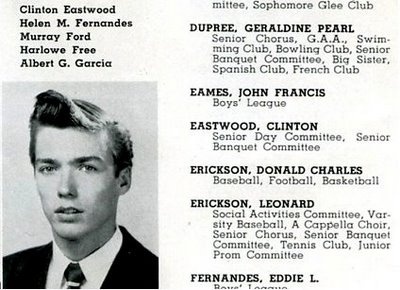 Legendary actor and director Clinton "Clint" Eastwood (b. May 31, 1930) was born in San Francisco. His family then moved a fair amount, including Oakland and Sacramento, before settling in Piedmont. After a bout of vandalism at Piedmont High School (riding his bike across a wet sports field, tearing up the grass) 6, Eastwood was forced to attend nearby Oakland Technical High School, from which he graduated, Class of 1949.

("Forced to attend" Tech perhaps explains why Eastwood is the total opposite of Tom Hanks, who generously contributed to Skyline. Clint's family moved to Seattle and he joined them after graduation, further weakening his Bay Area ties.)

Interesting ... born in San Francisco, Clint Eastwood, at 11 lbs., 6 oz. was nicknamed 'Samson' by the nurses at the hospital. 4

High school failed to capture Eastwood's interest, even though he exhibited talent in both sports and music. Although approached to join the drama club, Eastwood was not a 'joiner' and refused. Later in life Eastwood revealed that during high school he was only interested in girls and cars.

Eastwood lost his family ties to the Bay Area when his father moved for work to Seattle, Washington in 1949. During high school, Eastwood learned to play the piano (friends said he played until his fingers were bleeding), and one of his jobs was as a jazz and ragtime piano player at the Omar Club, an Oakland bar and restaurant in Downtown Oakland that was located at 2086 Broadway, across from the Paramount Theater. 5 Clint Eastwood lived with a friend in order to complete high school at Oakland Tech High, then moved to Seattle after graduation to live with his family. 3

Eastwood worked a number of odd jobs before being drafted into the Army in 1951. While in the Army during the Korean War Eastwood served as a lifeguard at Fort Ord. This ended up coming in handy when on October 1, 1951, a Douglas AD-1 bomber heading to Mather Air Force Base from Seattle, Washington crashed into the Pacific with Eastwood on board. Thinking he was going to die, but not seriously injured, Eastwood and the pilot swam from the sinking airplane the two to three mile distance to shore at Point Reyes. 3 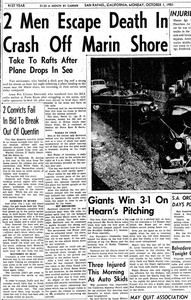 [Although this plane crash was the San Francisco Chronicle headline of October 1, 1951, http://sanfrancisco.lovetoknow.com/wiki/San_Francisco_Chronicle_Archives states that for articles from before 1995 a local library (in S.F.?) has to be contacted ... it would be interesting to have a photo of the article, but not if I have to drive into S.F.]

He directed several movies with scenes filmed in Oakland including:

Although not an Oakland connection, just read what seems to be an obscure Eastwood anecdote: In 1950 (when he was 20 years old) Eastwood visited Carmel for the first time and remarked he would someday like to live there, but had a problem with a 23 year old school teacher with whom he had a one night stand, that later stalked him, threatening to commit suicide. Does that sound at all familiar? Anyone, anyone? That's right, in 1971 Clint Eastwood's directorial debut was the psychological thriller Play Misty for Me, set in Carmel, about an obsessive woman stalking a man after a brief affair. Although the script was credited to another writer, how much of the plot was influenced by Eastwood's earlier experience? Life imitates art.