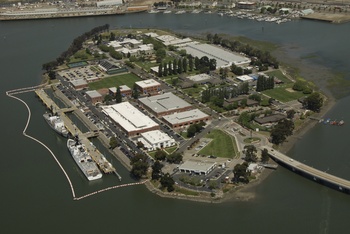 Coast Guard Island is an island in Brooklyn Basin (the arm of the Oakland Estuary, not the Brooklyn Basin residential development) that is home to a Coast Guard base. It is within Alameda city limits, but only reachable by land via a bridge from Dennison Street in Oakland. It gets its power and other utilities from Alameda.

The 1877 map of Oakland shows two smaller, marshy islands near where Coast Guard Island is now, but they were no longer there in the 1912 map, presumably having been dredged away for better access to Brooklyn Basin. The current island was created between 1915 and 1917 as part of the port expansion that deepened the navigational channels beyond the Inner Harbor.1 It was for many years called Government Island as there were several government agencies based there. It appears that the boundary between Alameda and Oakland was adjusted at that time to assign the entirety of the island to Alameda. This adjustment became problematic later, when the voters of the City of Alameda rejected a proposal to annex the island into Oakland so that Oakland could demolish the island so as to allow the construction of massive new piers in Brooklyn Basin. 2

Support Center Alameda was established June 1, 1982 and the island was renamed Coast Guard Island. Now the base (referred to as Base Alameda) is home to six Coast Guard cutters as well as various support commands. Some Coast Guard personnel associated with the base work in offices in the Federal Building.

Coast Guard Island and bridge
photo from Our Oakland 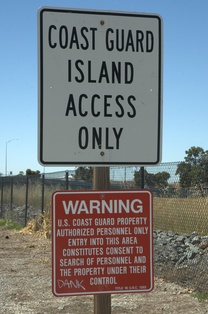 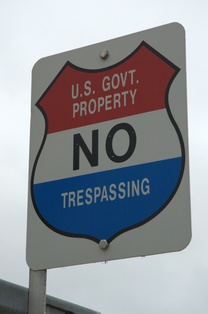 ...never mind, just stay out
photo from Our Oakland