Colonial Donuts has been a Lakeshore Avenue institution for decades. It sells donuts, and is open 24 hours a day. You can go there to play chess most times of day. The bathroom is in the back.  Even if you don't want donuts, you can use it as a shortcut between the parking garage and Lakeshore Avenue.

The donuts used to be made in-house, and most of today’s floor and table space had been reserved for cooling and drying racks and display cases. The fresh, hot donut smell permeated everything, and about all they sold besides donuts (and donut holes! don’t forget the big bags of those!) was coffee or hot chocolate. These days, you can order sandwiches and any manner of hot or cold drinks, but the donuts are trucked in from goodness knows where, and unfortunately by the time they arrive there’s no longer anything distinguished about ‘em. (It’s a little disappointing but hey, at least they’ve managed to survive this long …)

There are two other locations of Colonial Donuts, in Montclair at 6126 La Salle Avenue, and in downtown at 1636 Franklin Street, but neither is as popular or as distinguished as the Lakeshore Avenue location. There used to be a location in Dimond at 2141 MacArthur Boulevard.

Colonial Donuts was the recipient of the East Bay Express Best Donuts Readers' Poll Award in 2014. 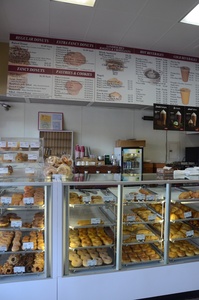 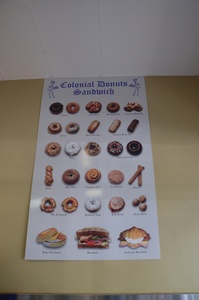