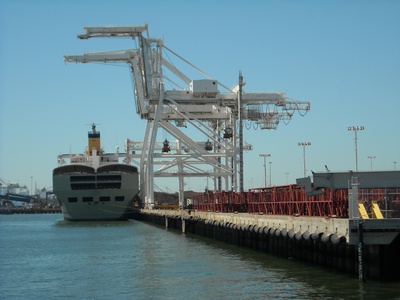 The Container Cranes at the Port of Oakland had long been one of the greatest Bay Area movie making urban legends, as many believed that they inspired the AT-AT snow walkers in "The Empire Strikes Back." In 2008 George Lucas, when interviewed, firmly stated that it was a myth.

On March 16, 2010 three 253-foot-tall cranes arrived from Shanghai, China, and had to be folded over to pass cleanly under the Golden Gate Bridge and the Bay Bridge. The cranes weigh 1,500 tons each and are large enough to accommodate container ships that are too wide to pass through the Panama Canal.

With the three new cranes, the Port of Oakland will have a total of 22 Super-Post Panamax cranes. The Oakland seaport is the fifth busiest in the United States.