Note: I believe police departments sell unmarked cars when they're decommissioned. If this doesn't have any extra lights it's probably not in action.

Both cars discussed on this page have regular (civilian) license plates, so this has almost assuredly owned by a private person; police cars (even unmarked ones) have CA Exempt plates.

There is an unmarked police car that lives on the east side of the street along Coolidge Avenue by Patten University. Occasionally it moves a short distance up or down the street. 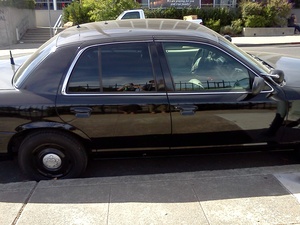 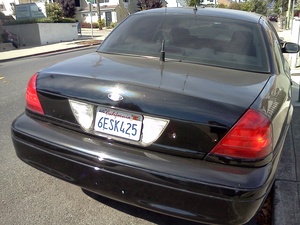 There is another unmarked car that appears to live in the back of the Buttercup Grill parking lot. It's almost exactly the same but is dark grey in color and has a license plate of 6XFE375.