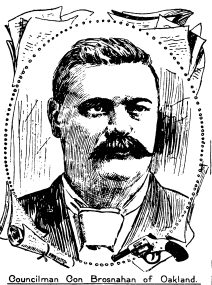 Con Brosnahan was born in Ireland in 1856 and came to New York with his parents as an infant. He was raised in Vermont, one of 9 children. He came to Oakland first in 1878, moved about a bit and then settled back in Oakland. In 1887 he formed Brosnahan & Barry, a carriage painting firm, along with John H Barry. By 1888 they had expanded to include all carriage-related businesses and had 12 employees.6 Brosnahan lived at 663 5th Street.9

In 1898, Brosnahan proposed a liquor ordinance that would divide the city into districts. The some districts would allow liquor sales and some would not.3 (Liquor licenses had been an issue in Oakland since the beginning of the city.) Apparently the moral standards of the city were at question and some liquor sales were happening too close to churches. In a foreshadowing of the food truck issue, Brosnahan proposed that the licenses would bring in increased revenue while benefiting the city. The issue was very contentious.8  Also that year, he proposed the dredging of Lake Merritt and got the full support of Council.4

It was in March, 1898, however, that Brosnahan had his most notable moment in Council. The City Council was debating water rates when things with the "Solid Six" got out of hand. One side wanted rates to go up, one side wanted them to stay the same or go down, and the crowd was hostile, much like in recent times. Brosnahan suggested that the meeting be adjourned but the Council decided to proceed. Brosnahan announced that he was going home. The crowd, which had previously been angry at Councilman Woodward, turned the full force of their anger on woodward, calling him a "quitter" and  a "corporation dog." The City Council president, Mr Pringle, ordered him to sit down, but Brosnahan wouldn't, and a shouting match ensued. Pringle threatened to fine Brosnahan and chaos ensued. The crowd and the police and the council all turned into a big mob. The Chronicle likened his size and demeanor to a "truck driver," and said that he physically pushed his way through the crowd. Pringle ordered the Chief of Police to eject Brosnahan but he pushed the Chief aside and left on his own, a mob hot on his tail. Brosnahan threatened to kill anyone who touched him.

He went into a bar and continued to threaten to kill the angry mob. His friends calmed him down and he walked toward his house but he had barely started when he turned around and faced the crowd, revolver drawn. Once again his friends stopped him, knocking his pistol down. When he got home, he pulled a second gun out and waved it at the crowd. His wife came out and talked him into the house.10 The next day Brosnahan said he was doing "what any American citizen would do" when faced with a cowardly mob. He apologized for the scene but said he "was not the aggressor."  "I go armed as a rule," he said, "because of the attitude of these crazy men who believe that I am responsible for great wrongs. Last night I had every reason to believe that trouble would come of the altercation at the City Hall, and I wanted it understood that I was not to be run up one street and down another... I was waiting to be attacked and was not looking for a chance to do the attacking. I used my revolvers on the crowd last night as any man would have done unless he was a coward and preferred a footrace to a mix-up."11 Although Brosnahan is mentioned in several contemporary history books and was involved in politics for years, this is the incident described in his brief death notice.