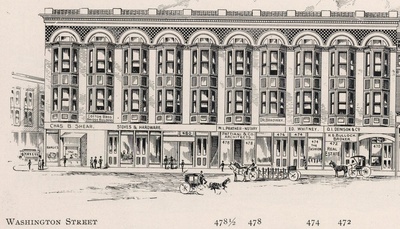 Most of their work has been replaced by newer construction, but the Purdon Crossing Bridge in Nevada County, built in 1895, still stands. 1,2,13 The bridge is marked with a plaque from the local E Clampus Vitus chapter.

Locally, Cotton Brothers constructed numerous small bridges around Alameda County. Their largest project was probably the replacement Webster Street Bridge c.1900. According to the obituary for Ernest, the brothers had also done a fair amount of work in Hawai'i. 3

In 1925, a number of homes on Ritchie St. were constructed by Cotton Brothers, 5 but those were by Arthur W. Cotton and Gordon B. Cotton, 6 who were not related to Ernest and Charles, and who had died in 1915 and 1920, respectively. Also, it appears the company went bankrupt in 1912. 17 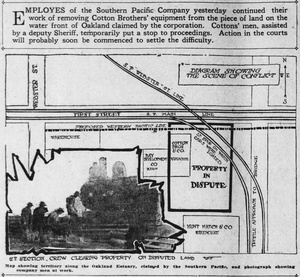 Disputes over the waterfront in Oakland were nothing new, dating back to the beginning of Oakland, when founding scoundrel and first mayor Horace Carpentier gained control of the waterfront in exchange for a one-room schoolhouse.

In December 1906, Southern Pacific sent workers to remove materials the Cotton brothers had stored near the waterfront (between Webster and Harrison), saying the land belonged to S.P. 7 The brothers said not so fast—the title of the land hasn't been settled—and asked the sheriff for protection from S.P. 8,10 Although the Cotton's attorney, William R. Davis, a veteran of the battle for the waterfront, was eager to take on S.P., the brothers agreed to move as soon as a new location could be found, and S.P. agreed to return the two flatcars worth of material and equipment they had already hauled off. 9 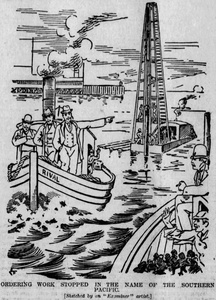 The Cotton Brothers were also involved in an 1893 dispute between the city and Southern Pacific. The Waterfront Company had begun driving piles off the waterfront in order to subsequently fill the area and create land. The city was against it (probably because of SP's control of the waterfront), and got a restraining order from Judge Henshaw to stop them. Someone at the city noted the restraining order was only against driving more piles; it said nothing about removing the ones already driven. So mayor George Pardee signed a resolution to hire the Cotton Brothers to remove the piles. 11

An attorney for the Waterfront Company, J.E. Foulds, got news of it, and took a boat out to stop the work. One of the brothers handed him the work order, smiled, and continued supervising the work. Rebuffed, Foulds consulted with A.A. Moore, attorney for SP, who set about getting a new restraining order to stop the removal. Judge Henshaw issued modifications to the order, not only halting the removal of the piles, but granting the Waterfront Company the right to replace the ones that had already been removed. A copy of the order was presented to the Cotton Brothers, and work ceased. 11

Some of the piles were replaced, but the mayor and others wrote an affidavit and took it to Judge Henshaw's house at 11 o'clock at night, and the order was vacated. The Waterfront Company crew went back to work the morning, not having received word yet. The Cotton Brothers went back to work the next morning, too, and were able to pull piles 2 or 3 times faster than the other crew could drive them. Chief of Police Schaffer appeared on the scene, notified the railroad's crew, and the pile driving stopped. Interestingly, while the city contended it had the rights to stop the piles, Henshaw's quick reversal apparently hinged on a technicality: the city hadn't been formally served with the restraining order, and so things were outside Henshaw's jurisdiction. 12

All 132 pilings were pulled and rafted together, to await further legal battles. 15 After this exchange, when the city attorney of Alameda sent a letter to the Waterfront Company requesting the pilings near Alameda be pulled, too, the company quickly agreed and did the work themselves. 16

Ultimately, much of the bay around the railroad moles was filled, but in the mean time the city re-gained control of the waterfront.