The Cox Cadillac Showroom (Don Lee Cadillac) at 230 Bay Place was designated as an Oakland Landmark on April 9, 2002, under Zoning Case #LM 98-014. A few months before the designation was made, the City approved a project proposed by AvalonBay that would have included 125 residential units and rehabilitation of the showroom for commercial uses and common areas for the residents. After a change in the residential market and a sale of the property to a new developer, the Bond Companies, the residential portion of the project was dropped in favor of a Whole Foods Market — which opened on September 26, 2007. The Showroom was rehabilitated as part of the Whole Foods project, although two historic “auto sheds” affiliated with the dealership were demolished while AvalonBay was in control of the site.1 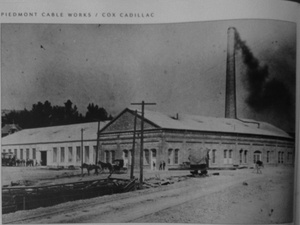 Building while it was still
Piedmont Consolidated Cable Company (undated)4 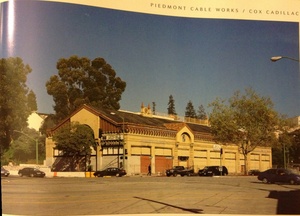 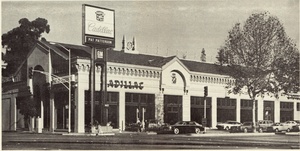 Pat Patterson Cadillac
(public domain, via Flickr)The building is important not only for its use as an auto showroom, but also for its original use — as the powerhouse and car barn for the Piedmont Consolidated Cable Company’s cable car line. Built in 1890, this system’s track ran from downtown, past this place (the midpoint of the line) and on straight up today’s Oakland Ave., over wooden trestles directly into the heart of Piedmont.

The PCCC building had a 150-foot-tall smokestack for its coal-fed boilers, which powered several huge dynamos (located approximately just inside the front entrance of Whole Foods today) that drove the cables. The Piedmont Baths were built next door to take advantage of any excess energy, and piped over the waste steam to heat its waters. In 1892 the PCCC started service to Mountain View Cemetery. The building (and cable cars in general) went out of use when streetcars electrified.3

Local architect Clay Burrell is credited with converting the “skeleton” of the former car barn and powerhouse into a showroom for Don Lee Cadillac, which later became Pat Patterson Cadillac, and then Cox Cadillac. 1 In its last incarnation, it was the home of Bill Cox Cadillac and Bill Cox Buick. For some great pictures of the transformation of the building into the Whole Foods Market, check out this collection of pix on Flickr.