Sidney Dearing's Creole Café opened in 1918 as a venue for jazz and blues music at 1740 - 7th Street in West Oakland, the first-known venue to feature African-American music on Seventh Street.

Pioneering New Orleans “tailgate” trombonist Kid Ory (then an Oakland resident) appeared regularly in 1921 with his Original Creole Jazz Band. A year later, the group traveled to Los Angeles and became the first black jazz band ever to make a recording.

The Jan. 7, 1922, issue of the California Voice, the oldest black newspaper on the West Coast, contained an editorial titled “Oakland’s Shame.” Bemoaning the recent decline of a number of black-owned businesses in West Oakland, it read in part: “The Creole Café, the finest of its kind west of Chicago, can attribute its failure to lack of patronage by the Race, hence they were forced to ply for patronage to the whites and slowly but surely race prejudice crept in; this was the beginning of the end.”​

If racial tension doomed the Creole Café, it apparently had subsided by the time Harold “Slim” Jenkins opened a liquor store (and later a nightclub and restaurant) near the cafe’s former site on April 7, 1933—the day that Prohibition ended. Born in Monroe, La., Jenkins came to California right after World War I, worked as a waiter, and saved his money. Slim Jenkins’ Supper Club became one of the most celebrated black nightclubs in the state. It attracted a racially mixed clientele, including several mayors of Oakland and other of Jenkins’s white friends in the city’s Republican establishment. Unlike the Creole Café, it managed to stay in business for 39 years. Blues on Seventh Street | The Monthly - Recollections of the West Oakland scene in its heyday. By Lee Hildebrand 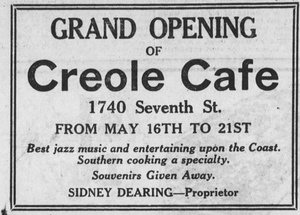 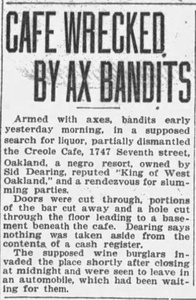 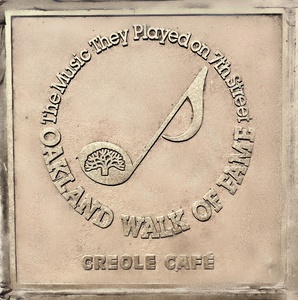